Gaming is one of the fastest-growing sunrise industries in India, clocking 40% growth in 2019–20. The industry generated US$ 1.5 billion in net revenue during this period and is expected to surpass US$ 5 billion by 2025. The Indian gaming industry recently overtook the US in terms of user base that exceeded 300 million. Mobile phones dominate the Indian gaming industry, with phone-based gaming apps accounting for 86% of total gaming apps in 2021. The country had also experienced a 22% rise in the adoption of mobile games in 2021. Internet affordability and growing smartphone penetration in the country are indicative of bright prospects for the industry.

While the need for virtual entertainment is driving the surge in gaming, key growth drivers include:

India has 502.2 million smartphone users, with smartphone penetration at 36.7%. In the first quarter of 2021, India's smartphone shipments increased by 23% year on year to over 38 million devices. First-quarter shipments were at an all-time high. The use of smartphones has risen with the advent of more gaming-friendly handsets supported by faster processing capabilities. For instance, the RAM in these smartphones has increased by three to four times in the last five years.

Internet access in India is very cheap, with 1 GB of mobile data costing US$ 0.26 as compared to the global average of US$ 8.53. This has led to heavy internet use among users as approximately 46% of the country are active internet users. In India, the average monthly mobile data usage stands at 14.6 gigabytes (GB) compared to 11 GB in the US.

India has a significant demographic advantage with 46% of the population under the age of 25 and 67% in the working class (ages 15–64). Demography is considered a major factor for growth in the gaming industry. According to a survey conducted by KPMG, nearly 75–80% of the respondents between the group of 18–24 and 25–36 reported playing at least one to three times a week. Engagement is perceived to be higher in the age group of 37–50, with nearly 50% reported to be playing more than four times a week.

Indians are increasingly getting acquainted with more sophisticated games, amid the rising availability of triple-A title (first-tier) games such as PUBG and Fortnite. India accounted for 25% of the downloads for PUBG, with over 50 million active users per month. Indian games such as Ludo King, Dream 11 and MPL registered over 100 million downloads. Furthermore, India has always been at the forefront of modern complicated games, therefore Indians had a quicker learning curve than Chinese players when the same games debuted online.

Rise of the Indian gaming industry

Gaming is the fastest-growing entertainment industry in India, clocking 40% revenue growth in 2020. This has created immense job opportunities. Around 3,000–4,000 people are directly or indirectly employed in the industry, which generated advertising revenue of Rs. 2,500 million (US$ 33 million) in May 2019 and recorded FDI of US$ 200 million. There are more than 15,000 game developers in the country. Various international studios such as Electronic Arts (EA), Ubisoft and Zynga set up gaming development centres in India in early 2010 and have groomed several gaming developers. The number of gaming companies increased nearly 10x since 2010, crossing 275 in 2020. Some of these are key players such as MPL, which was valued at US$ 950 million within three years of being launched. MPL reported more than 70 million active users in 2020, with games like WINZO and Paytm First having more than 20 million and 70 million active users, respectively. Investors are drawn to the boom in the Indian gaming industry with platforms that offer casual genres being the top priority with over 88% of all Venture Capitalist (VC) funds invested into that genre.

This meteoric rise in gaming has boded well for the individual content creator industry, contributing to its growth. With over 100 million active users on YouTube gaming in India, a new source of monetisation has emerged. Accordingly, streamers are estimated to make about US$ 1 million per year. The growth in monetisation, coupled with the boom in YouTube gaming, aided the surge in mobile gaming in India. Esports is another segment witnessing growth. The country generated US$ 97 million in revenue from this category, with more than 17% of its total gaming population-watching esports.

Emerging companies in the gaming

Currently, there are 920 gaming start-ups in India, with Mumbai being the headquarter for the top players in this domain. Some of the leaders are Dream11, Nazara Technologies, and Halaplay. GameEon Studios, working on the country’s first triple-A title Mumbai Gullies, received funding of US$ 320,000 recently. 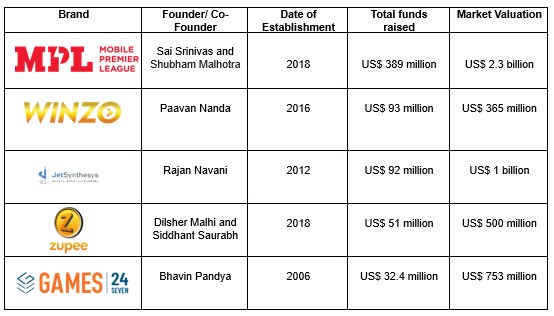 The Indian government has undertaken several initiatives to boost growth in the domestic gaming industry.

The Indian gaming industry is set to be on a high growth trajectory, with rapid digitalisation and transformation, increasing internet usage and rising smartphone penetration. The domestic gaming industry is expected to create 10,000–12,000 direct and indirect jobs by 2023. In the following two years, it is expected to attract US$ 100 million in foreign direct investment (FDI). These factors indicate bright prospects for the industry. With big conglomerates such as Reliance planning to enter the industry to India’s first homegrown triple-A title, its gaming industry is set to reach US$ 5 billion by 2025.