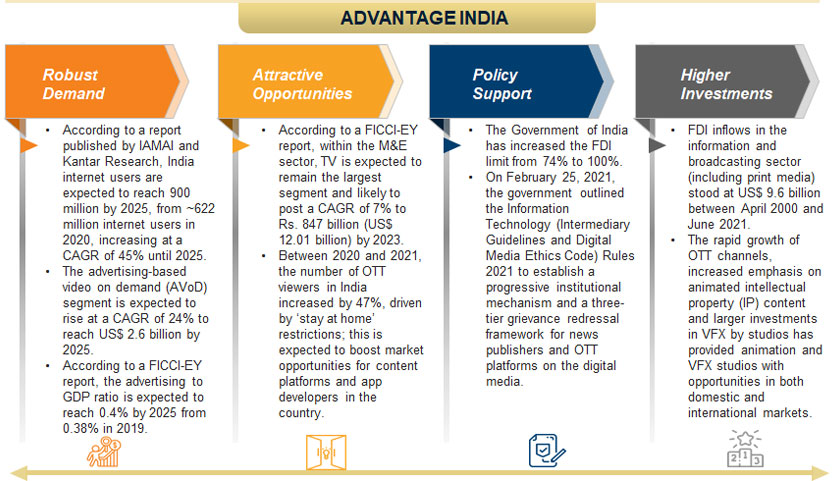 The Indian Media and Entertainment (M&E) industry is a sunrise sector for the economy and is making significant strides. Proving its resilience to the world, Indian M&E industry is on the cusp of a strong phase of growth, backed by rising consumer demand and improving advertising revenue. According to a FICCI-EY report, the advertising to GDP ratio is expected to reach 0.4% by 2025 from 0.38% in 2019.

Within the M&E sector, Animation, Visual Effects, Gaming and Comic (AVGC) sector is growing at a rate of ~29%, while the audiovisual sector and services is rising at the rate ~25%; is recognised as of one of the champion sectors by the Government of India. The AVGC sector is estimated to grow at ~9% to reach ~Rs. 3 lakh crore (US$ 43.93 billion) by 2024, stated Union Minister of Commerce & Industry, Consumer Affairs & Food & Public Distribution and Textiles, Mr. Piyush Goyal.

According to 'India: Online Video Trends and Omdia Consumer Research Highlights' report published by Omdia (published in 2021), the Indian SVOD market, with OTT video subscriptions, reached ~62 million in 2020 from ~32 million in 2019. According to EY-Parthenon, India’s publishing industry is likely to reach Rs. 80,000 crore (US$ 10.74 billion) by 2024.

Growth of the sector is attributable to the trend of platform such as YouTube that continues to offer recent and video content-linked music for free, which is expected to drive the paid OTT music sector reaching ~5 million end-users by 2023, generating revenue of ~Rs. 2 billion (US$ 27 million).

By 2025, the number of connected smart televisions are expected to reach ~40-50 million. 30% of the content viewed on these screens will be gaming, social media, short video and content items produced exclusively for this audience by television, print and radio brands. In the second quarter of 2021, smart TV shipments from India increased by 65% YoY, due to rising expansion activities adopted by original equipment manufacturers (OEMs) for their smart TV portfolios.

According to the FICCI-EY media and entertainment industry survey, those who watch online videos through bundled packages (online video services bundled with mobile and broadband connections) will account for half of all online video viewers (399 million) by 2023, up from 284 million in 2020.

As of 2020, India registered ~803 million online video viewers, including streaming services and videos on free platforms such as YouTube. Mobile video viewers stood at 356 million in 2020, driven by rising number of users preferring video content over the last few years.

OTT video services market (video-on-demand and live) in India is likely to post a CAGR of 29.52% to reach US$ 5.12 billion by FY26, driven by rapid developments in online platforms and increased demand for quality content among users.

The Telecom Regulatory Authority of India (TRAI) is set to approach the Ministry of Information and Broadcasting, Government of India, with a request to Fastrack the recommendations on broadcasting, in an attempt to boost reforms in the broadcasting sector. The Government of India has agreed to set up National Centre of Excellence for Animation, Gaming, Visual Effects and Comics industry in Mumbai. The Indian and Canadian Government have signed an audio-visual co-production deal to enable producers from both the countries exchange and explore their culture and creativity, respectively.

In June 2021, the Union Ministry of Information and Broadcasting notified the Cable Television Network (Amendment) Rules, 2021, which aims to establish a three-layer statutory mechanism for citizens to raise grievances with respect to broadcasted content.

On February 25, 2021, the government outlined the Information Technology (Intermediary Guidelines and Digital Media Ethics Code) Rules 2021 to establish a progressive institutional mechanism and a three-tier grievance redressal framework for news publishers and OTT platforms on the digital media.

In February 2021, the digital entertainment committee of the Internet and Mobile Association of India (IAMAI) finalised a code of conduct to form the basis for self-regulation code for OTT content. The code has been endorsed by 17 OTT platforms including Netflix, Amazon Prime Video, Disney+ Hotstar, ZEE5 and Voot.

In February 2021, Prasar Bharati (India) and PSM (the official State Media of Maldives) inked an agreement to facilitate collaboration and capacity building in the field of broadcasting.

Digital audio–visual content including films and web shows on over-the-top (OTT) streaming platforms, as well as news and current affairs on online platforms, have been brought under the Ministry of Information and Broadcasting in November 2020.

Indian M&E industry is on an impressive growth path. The industry is expected to grow at a much faster rate than the global average rate.

Growth is expected in retail advertisement on the back of several players entering the food and beverages segment, E-commerce gaining more popularity in the country, and domestic companies testing out the waters. Rural region is also a potentially profitable target.

CINEMA OF THE WORLD