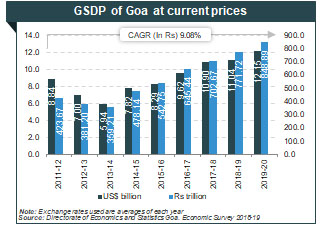 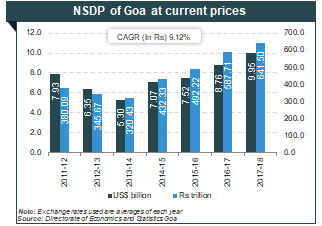 Goa is located in the western region of India. The state shares its borders with the Arabian Sea to the west, Maharashtra to the north and Karnataka to the south and the east. It is traditionally known as a tourist paradise for its natural scenery, unique beaches and cultural diversity.

Goa is one of the fastest growing states in the country. The Gross State Domestic Product of Goa at current prices increased at a Compound Annual Growth Rate (CAGR) of 9.08 per cent from 2011-12 to 2019-20. Goa’s net state domestic product (NSDP) was Rs 641.50 billion (US$ 9.95 billion) in 2017-18. Goa's economic growth is driven by the strong performance of industrial sectors such as mining, tourism and pharmaceuticals.

As of November 2019, Goa had a total installed power generation capacity of 573.96 MW. Goa is also one of the few states in India to achieve 100 per cent rural electrification.

Goa has a well-developed social, physical and industrial infrastructure and virtual connectivity. It has an international airport that is in line with its importance as a globally-recognised leisure destination. It also has significant port infrastructure. The state has an established base for the pharmaceuticals industry and an emerging destination for knowledge-based industries such as biotechnology and IT.

According to the Department for Promotion of Industry and Internal Trade (DPIIT), FDI inflows into the state of Goa, during April 2000 to June 2019, were US$ 985 million.