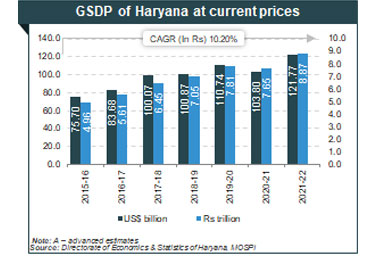 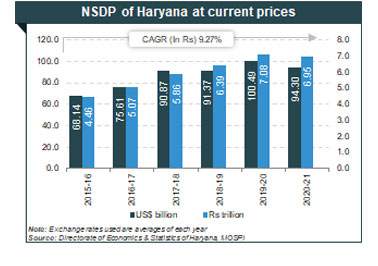 Haryana is one of the leading states in terms of industrial production, especially passenger cars, two- wheelers, mobile cranes, and tractors. Haryana is the second-largest contributor of food grains to India’s central pool and accounts for more than 60% of the export of Basmati rice in the country, third-largest exporter of software and one of the preferred destinations for IT/ITeS facilities.

Haryana is a preferred destination for auto majors and auto-component manufacturers. The state is host to many large automotive players. The state produces two-thirds of passenger cars, 50% of tractors, 60% of motorcycles and 50% of the refrigerators manufactured in the country. Automobiles and auto component exports from Haryana were ~US$ 1.070.3 million in FY20 and reached US$ 618.7 million in FY21.

Haryana is among the leading states in terms of IT export. Export of electric machinery and equipment for Haryana reached US$ 379.3 million in FY20 and US$ 325.36 million in FY21.

The state offers a wide range of fiscal and policy incentives for businesses under the Industrial and Investment Policy, 2011. Moreover, it has sector-specific policies, particularly for IT and tourism. The Haryana State Industrial and Infrastructure Development Corporation Ltd (HSIIDC) is the state's premier industrial promotion and investment facilitation agency, responsible for providing reliable and efficient facilities for entrepreneurs investing in the state.

According to the Department for Promotion of Industry and Internal Trade (DPIIT), cumulative Foreign Direct Investment (FDI) inflows in Haryana stood at US$ 1.7 billion in FY21 and were US$ 2.42 billion between October 2019 and March 2021.

The state has taken several steps for developing industrial infrastructure to achieve consistent economic growth, below are some of the initiatives: