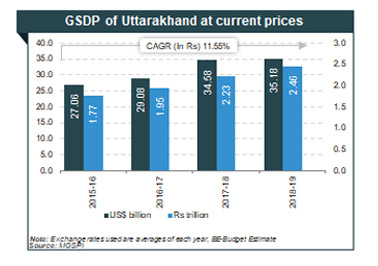 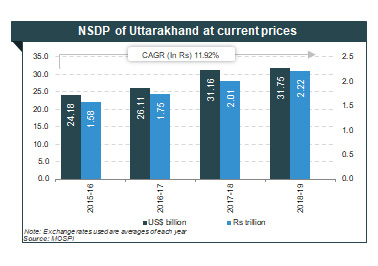 Uttarakhand is one of the fastest growing states in India thanks to the massive growth in capital investment arising from conducive industrial policy and generous tax benefits. The state is situated in the foothills of Himalayas. The presence of several hill stations, wildlife parks, pilgrimage places and trekking routes make Uttarakhand an attractive tourist destination.

Uttarakhand is a well-renowned religious and wildlife tourism destination. The topography in Uttarakhand ranges from foothills and plains to higher snow-clad mountains, thus including almost all major climatic zones conducive to agro-horticulture.

In 2019, domestic tourist inflow in the state stood at 37.58 million, while foreign tourist visits crossed over 0.15 million. In 2018, 27.81 lakh pilgrims arrived in state for Chardham Yatra, out of which 7.32 lakh pilgrims visited Kedarnath.

The main growth drivers in the economy have been identified as hill agriculture with emphasis on horticulture including aromatic and medicinal plants (promoted by AYUSH) and tourism to improve productivity and create sustainable livelihood, especially for people in the higher reaches of the state.

The Micro, Small and Medium Enterprises (MSME) sector is cross-cutting across all other sectors, due to its employment generation potential, and is hence, extremely important in the growth strategy of the state.

Simultaneous efforts to develop two other sectors—renewable energy in the form of small hydro-power and expansion of IT to all parts of the state economy—will make the growth plan sustainable and strengthen its fundamentals.

Uttarakhand as a state has great potential for the clean option of hydro-power and the smaller and environment-friendly hydel projects offer renewable sources of energy.

The IT sector has consolidated strengths in the state by digitising many public services, especially by provision through the Common Service Centres (CSCs) under the e-governance programme. It has also established convenient Wi-Fi services for promotion of tourism in the state and is expanding mobile & Internet connectivity throughout the state among its other achievements.

According to the Department for Promotion of Industry and Internal Trade (DPIIT), cumulative Foreign Direct Investment (FDI) inflow stood at about US$ 710 million from April 2000 and June 2020. Between October 2019 and December 2020, FDI inflows in Uttarakhand stood at US$ 17.67 million. As of May 2020, 11 Industrial Entrepreneurs Memorandums (IEMs) worth Rs. 288 crore (US$ 39.10 million) have been filed in Uttarakhand.