According to the Annual Survey of Industries (ASI) 2018–19 conducted by the Ministry of Statistics and Programme Implementation (MoSPI); the output of the food processing sector was approximately US$ 179.9 billion (Rs. 12,76,995 crore) contributing around 12.83% to total output in the manufacturing sector. The gross value added (GVA) for the food processing sector was around US$ 30.0 billion (2.24 lakh crore) during 2019–20, which resulted in a contribution of 1.69% to the overall GVA. The ASI also states that approximately 20.05 lakh people were involved in the food processing sector during the survey period. The food processing sector is very lucrative as it permits 100% Foreign Direct Investment (FDI) through the automatic route. However, 100% FDI under the sovereign approval route applies for retail trading and e-commerce for food products produced in the country. Primary industries of this sector include the processing of sugar, grains, edible oils, beverage, dairy products, fruits and vegetables, meat, and seafood. The built-in capacity and understanding of plant ingredients processing has encouraged Indian processors to develop plant-based substitutes over the past few years.

According to a report published by Global News Wire, India’s meat substitute market is estimated to advance at a compounded annual growth rate of 7.48% during the forecast period of 2021–26, reaching US$ 47.57 million by 2026. The market is largely driven by rising health concerns, coupled with an increase in awareness of different diseases caused by a deficiency in proteins. Over the next few years, growth in the number of vegetarians will continue to fuel the market.

According to Forbes, India is the largest producer of pulses in the world, accounting for 25% of the total output; however, more than 70% of the people in India are protein deficient. Deficiency can be caused by lack of awareness and less consumption of a sufficient amount of protein on a regular basis. India has an abundance of protein-rich food such as pulses, soybeans, legumes, seeds, nuts, milk, meat, fish, and poultry. However, not all sources of protein are feasible for people across the country, which could be due to lack of awareness, affordability, and availability or because of cultural, ethical and health choices.

Plant-based protein sources can play a vital role in treating deficiency as they not only offer varieties but are also pocket-friendly. A balanced diet combining two or more sources of plant-based foods can meet protein requirements in the human body.

Alternatively, consumers are very receptive to plant-based meat substitutes. Many consumers are demanding such products as they provide several health and fitness benefits such as prevention of non-communicable diseases, obesity, and digestive disorders. Amid the Covid-19 pandemic, the popularity of these products has surged as they are being perceived as immunity boosting food products. Flexitarians, individuals, or a group that is vegetarian but tends to consume meat and fish occasionally, can relish the taste of animal meat without consuming animal products. Furthermore, urban consumers are welcoming the idea of plant-based processed food as a rich source of protein.

According to the United States Department of Agriculture (USDA) industry report, India seems to be a nascent market for plant-based meat substitutes. Indians have traditionally consumed soybeans, jack fruit, dairy, and pulses for protein. According to the UN Livestock Long Shadow Report, around eight out of 21 alternate meat start-ups were launched during 2019–20 and five international and domestic players forayed into this segment during 2020–21. India has emerged as the largest consumer base in the world, with a massive scale of urbanisation and transition in income group. As per a survey conducted by the University of Bath and the Good Food Institute in 2019, 63% of Indians were either very or extremely likely to buy plant-based meat daily. 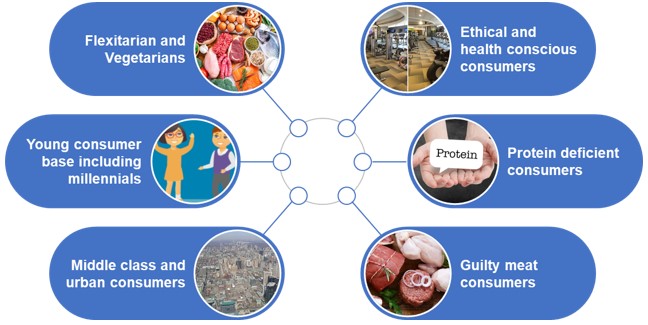 India’s plant-based meat industry is getting global recognition as major international firms have ventured into this industry via partnerships. For example, Archer Daniels Midland (ADM) partnered with Imagine Meats, an Indian plant-based meat producer. Under this strategic partnership, ADM will source raw materials and be actively involved in a technology partnership for manufacturing products under the brand name of Imagine Meats. The Indian partner, Imagine Meats, is working on developing plant-based versions of conventional Indian cuisine, such as biryani and kebabs, and usage of soy as well as pea proteins for making curry.

Allana Group subsidiary Tiffany Foods has started to import Beyond Meat patties and sausages into the Indian markets. The products are being popularly marketed by Urban Platter, an e-commerce site, mainly in metropolitans and tier-1 cities such as Mumbai, Delhi, and Bangalore. Additionally, Tiffanny Foods plans to deliver Beyond Meat products to retail outlets such as Nature’s Basket and Foodhall.

Key initiatives taken by the government for supporting the food processing sector and major policy measures undertaken include:

At present, plant-based meat in India can be purchased in grocery stores, hotels and restaurants, and e-commerce sites. These food products are likely to witness healthy traction in India, given the increase in awareness of such products and substantial growth in urban population. Social media influencers and celebrities have played a significant role in highlighting the importance of plant-based meat. A rise in health-related problems and the growing popularity of healthy alternatives are acting as tailwinds for the future of plant-based meat in India. This in turn could result in high growth potential in the coming years.