Overview
Evolution of the Indian pharma industry began in the 20th century with establishment of the first pharma company in Kolkata. Prior to this, until 1970’s, the market was primarily dominated by foreign companies with a limited number of domestic players. In 1970, the Indian government introduced the ‘Patents Act 1970’, which enabled domestic pharma companies to perform reverse engineering on the drug manufacturing processes without paying royalty to the original patent holders; this resulted in emergence of domestic manufacturers. Following this, between 1990 and 2000, several Indian pharma companies joined the export market on the back of knowledge acquired by manufacturing generic drugs—that helped increase their capabilities and establish a global reach—and economic liberalisation policies; this exposed the economy to privatisation and globalisation and further, accelerated pharma exports.

In 2020, India's pharmaceutical industry was the third-largest by volume and 14th largest by value worldwide. The industry supplies ~20% generic drugs and ~62% vaccines produced globally. The country has ~3,000 pharmaceutical companies and 10,500 manufacturing units. Moreover, India’s economic growth and public health outcomes were significantly supported by the pharma industry. According to estimates, in 2020, the industry employed ~2.7 million people directly and indirectly in high-skill areas including R&D and production. Every year, the industry creates a trade surplus of ~US$ 11 billion, making it one of the top five sectors contributing to reduce India's trade deficit.

The Indian pharma industry recorded revenues of US$ 41 billion in 2021 on the back of strong formulation development capabilities and foothold in international markets such as North America and Europe. India emerged as an international manufacturing hub for generic medicines due to its large base of raw materials and availability of trained workforce. Furthermore, besides the United States, India is the only country with the largest number of the USFDA-approved pharma factories, with >262 including active pharmaceutical ingredients (APIs), as it produces drugs for a third of the price in the United States and half the price in Europe.

According to Economic Survey 2020-21, the Indian pharma industry is expected to expand to US$ 65 billion by 2024 and ~US$ 130 billion by 2030. COVID-19 pandemic has offered India with both an opportunity and a challenge in its quest to become the global pharmacy hub. India's pharmaceutical exports totalled US$ 24.4 billion in FY21, up 18.0% from US$ 20.7 billion in FY20.  According to data from the US Food and Drug Administration, Indian pharmaceutical companies have received nearly half of all new abbreviated new drug application (ANDA) approvals in the last nine months of FY21; this is likely to help boost exports in the future years. 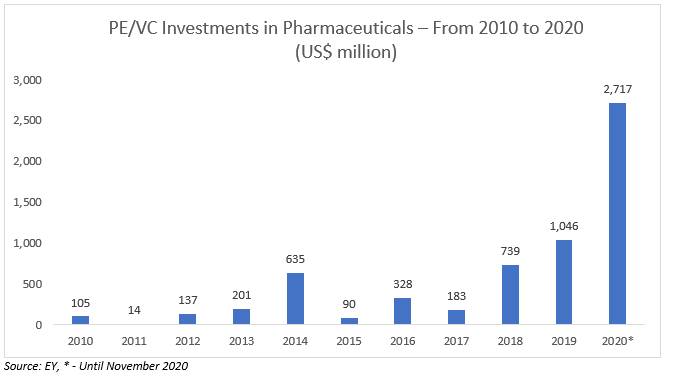 Production-Linked Incentive (PLI) scheme for Pharmaceuticals
The Indian government introduced the ‘production-linked incentive (PLI)’ scheme for the pharmaceuticals sector to encourage, boost production of high-value products in the country and enhance value addition in exports from FY 2020-21 to FY 2028-29. The Department of Pharmaceuticals will oversee this programme and announced incentives worth Rs. 15,000 crore (US$ 2,073 million) to the sector. Currently, India sells pharmaceuticals to ~200 countries worldwide but imports high-value patented medicines for domestic use. Through the PLI scheme, the government intends to make India's pharmaceutical sector more competitive by lowering import costs.

Under the scheme, the pharmaceuticals sector's product lines are divided into the following three groups:

Since FY01 until FY21, the Indian drugs & pharmaceuticals industry has attracted ~US$ 18 billion in foreign direct investments (FDIs), making it one of the top 10 sectors attracting investments.

Given the benefits of setting up a business in India and the market access it opens for investors, the government is wooing foreign investments from Latin American and Caribbean countries. Moreover, drug firms located in India will have access to not just the domestic market, but also the US, Japan, the EU and Southeast Asia, according to Mr. D V Sadananda Gowda, Ex-Minister of the Ministry of Chemicals and Fertilisers.

The Road Ahead…
By supplying high-quality medications in large volumes, the Indian pharmaceutical sector has developed a significant position in the global generics market. The country has built a global reputation of being dependable, high-quality and cost-effective drug supplier through innovative methods and formulations. The Indian pharmaceutical sector has gained a significant portion of the market in developed economies such as the US (1 out of every 3 tablets) and the UK (25% medicines consumed) by making critical pharmaceuticals inexpensive and accessible.

In 2021, the sector is valued >US$ 41 billion, with the potential to rise to US$ 130 billion by 2030. This can be achieved if opportunities like supporting state-sponsored health-care programmes and emphasising chronic-care medicine might lead to universal drug access, investing in emerging product categories such as biosimilars, gene therapy, and speciality medicines, and explore underpenetrated international markets to increase exports are taken advantage of. To accomplish the objective of a 13-14% CAGR, all players—Indian pharmaceutical firms, the government & regulatory bodies and the IPA (Indian Pharmaceutical Association) must work together. Government support, in the form of investments, policy support and regulatory interventions, is critical to augment the sector.

The Indian pharmaceutical industry has the potential to significantly contribute to the country's economic prosperity. From 2021’s levels of US$ 11 billion, the industry can aim to increase net foreign exchange revenues to ~US$ 30-40 billion annually by 2030. In the same period, the industry has the potential to create 1-2 million additional jobs and therefore, boost consumption in the local economy.

In August 2021, five pharmaceutical firms announced to tap the initial public offering (IPO) market to raise >Rs. 8,800 crore (US$ 1.18 billion), riding on strong investor interest in the healthcare sector. The list includes IPOs for Emcure Pharma at Rs. 4,500 crore (US$ 607.19 million); Vijaya Diagnostic Centre at Rs. 1,500 crore (US$ 202.38 million); Krsnaa Diagnostics at Rs. 1,213.33 crore (US$ 163.76 million); Supriya Lifesciences, a Mumbai-based bulk drugs maker, at Rs. 1,200 crore (US$ 161.90 million); and Windlass Biotech (pharma formulations contract development and manufacturer (CDMO)) at Rs. 401.5 crore (US$ 54.19 million). Also, pharmaceutical companies are looking to capitalise on China’s ‘Plus One’ strategy to source APIs, as India is the most preferred choice to relocate production facilities.

The industry's current success is primarily due to its capacity to produce high-quality, low-priced generic medicines, which are underpinned by structural cost benefits owing to new manufacturing techniques. However, generic price erosion, rising market rivalry, greater regulatory scrutiny, new tax systems, domestic pricing controls and reliance on raw resources from foreign countries are some current challenges faced by the industry. As a result, the moment has come for the Indian pharmaceutical sector to explore various opportunities dwelling in the market and use them to shape its future.