Women entrepreneurs and their increasing presence in India have significantly influenced the social and economic demographics of the country. The participation of women in the labour force has helped millions of families to pull out of poverty and has led to job creation. Women are well known for their leadership skills and hence dominate in new-age industries such as electronic manufacturing, where more than 50% of the employees are women because of their high-precision work and better productivity levels. This attitude towards work and commendable business skills have also emphasised the importance of women in the modern workforce.

Role of Women in India's Economy

In India 20.37% of women are MSME owners which account for 23.3% of the labour force. They are considered to be the backbone of the economy. According to McKinsey Global, India can potentially add US$ 700 billion to global GDP by increasing women’s participation in the labour force. The percentage of women working in the manufacturing and agriculture sectors is higher than that of men. These sectors are usually credited with helping families come out of poverty and contributing to higher household income. Moreover, literacy rates among women grew at 8.8% in FY21, which further highlights the bright prospects of the country.

Women-led businesses provide a great impetus to the economy. India has 432 million working-age women and 13.5 –15.7 million women-owned businesses that provide direct employment to 22–27 million people. In addition, a number of businesses are being controlled by women. Indian women are independent and have a strong motivation to start their own business. According to Boston Consulting Group, start-ups founded or co-founded by women generate 10% more cumulative revenue over a five-year period. These start-ups have a more inclusive work culture and employ 3x more women than men. Moreover, women-led businesses are estimated to grow 90% in the next five years.

Women entrepreneurs are empowering 50% of India’s start-up ecosystem, driven by:

Businesses that have women at the helm are considered to run very efficiently, and some of the compelling reasons to invest in a such a business are:

In India, 45% of the start-ups are run by women, of which over 50,000 are recognised by the government. The country witnessed the most women-led start-ups turning into unicorns in 2021. Major start-ups run by women are listed below. 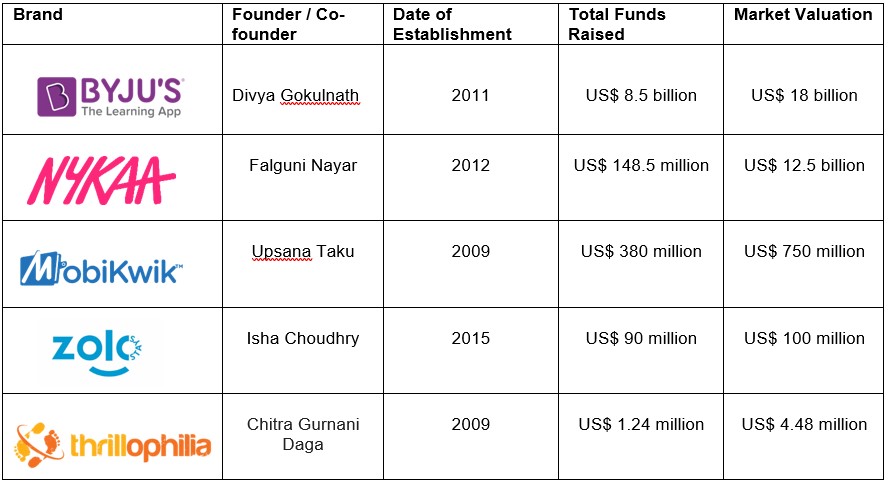 The Indian government has increased the budget for Women and Child Development by 14% in 2021. It has set aside over Rs. 30,000 crores (US$ 3.97 billion) in FY21. This budgetary allocation also includes various development schemes as listed below.

This type of business loan was set up in 2017 to help women access cheap loans and dream big despite their lack of resources. The scheme provides loans of over Rs. 20 crores (US$ 2.46 million) for women entrepreneurs. A collateral-free loan can also be availed of for loans worth less than Rs. 1 crore (US$ 0.13 million).

This scheme was launched for women entrepreneurs looking to start their business in certain sectors such as agriculture, retail and manufacturing. The scheme provides loans at an interest rate that is 0.25% below the base rate. The maximum loan application is Rs. 20 lakhs (US$ 26,468).

This is a flagship platform started by NITI Aayog to promote women entrepreneurship. The platform hosts various workshops and educational events to motivate women to start their own business.

Even though the scheme was started to help anyone looking to set up a micro/small enterprise get an institutional credit of up to Rs. 10 lakhs (US$ 13,240), it was mostly availed of by women. 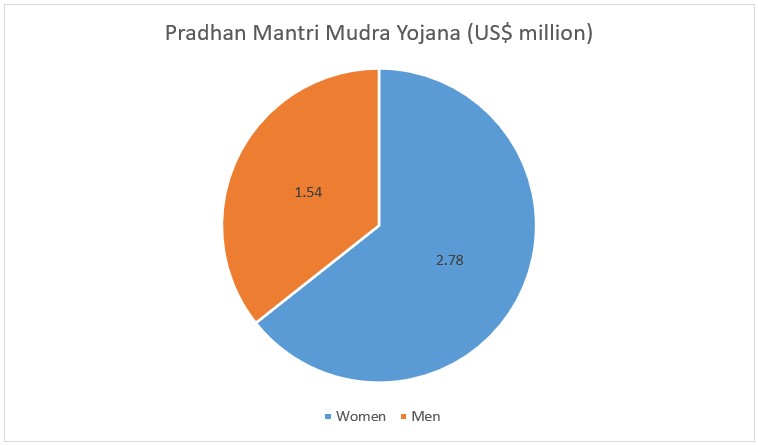 India was a country where a woman even owning a bank account was considered a major benchmark. However, it currently has over 15.7 million women-owned enterprises, with women leading the start-up ecosystem. This drastic transformation clearly underlines the potential of Indian women and their determination. In the coming decades, India is set to witness a major shift, with women dominating the workforce as well as shaping and enhancing the future of the country. It is estimated that over 30 million more women-owned businesses are expected to provide 150–170 million jobs by 2030. This could be a game changer and help the economic outlook look brighter than ever.