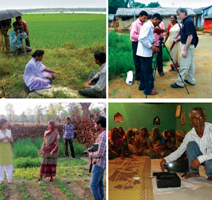 It is a bit incongruous to find a game application on a website which is purported to have unleashed a quiet revolution in India's countryside. But right below the neatly stacked vignettes of farming activities is the link to the game which takes you to Facebook. You're inclined to dismiss it as a takeoff on Farmville, another app that has 21 million Facebook community members hooked. But, Wonder Village, with 22,000 registered uset, does what it says—bridge the real and virtual, with the aim to raise social awareness and help raise funds for the development sector. There are many such technological marvels in store as you trawl the website to understand what exactly Digital Green innovates.

Digital Green was established in 2006 in Bangalore by Rikin Gandhi, a young computer science graduate from Carnegie Mellon University and masters in aeronautical and astronautical engineering from Massachusetts Institute of Technology. A pilot with ambitions to become an astronaut, Gandhi changed course midstream. In fact, it was to help start a biodiesel venture on the wastelands of Maharashtra that had brought Gandhi to India. No one could have foreseen that the boy born and raised in the US would decide to soon ‘reverse migrate' to India and work in the rural countryside.

Today, Digital Green's 'agriculture extension innovation' has wrought beneficial changes in the lives of 109,911 farmers of 1,541 villages belonging to six states of India. Not surprisingly then, the International Fertiliser Association (IFA) has recognised Gandhi for the 2012 IFA Norman Borlaug Award. In 2010, Gandhi also featured in Technology Review's Annual List of 35 Innovators under 35 years of age. The same year, he was one of the eight visionaries to feature in The Fortune Global Forum Visionaries List.