Pedalling a Green Cause 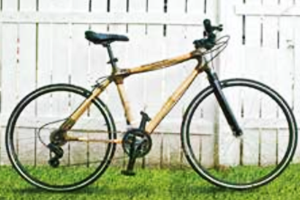 Bambikes promises physical exercise, fresh air and in addition reduces your carbon footprint on Mother Earth. The architect of India's Bambikes, Mr Vijay Sharma, passionately desires that more people take to cycling for the health and ecology benefits that it packs in its pedals. It is this singular wish that is driving him to persist with building these ecofriendly Bambikes. The bikethough has created plenty of buzz in the India and abroad.

The popularity of Sharma's Bambike pans across the globe. From Mauro Vanoli, a bike enthusiast from Italy who came down to Bengaluru to get a customised mountain terrain bike (MTB) made at Sharma's workshop, to the German granny who was on a mission to travel across the world on her bike in 10 years, and chose Bambike for her forward journey after meeting Sharma in Bengaluru in 2010.

Sharma, an alumnus of the Centre for Environmental Planning and Technology, Ahmedabad, credits his creative skills to his carpenter father whose workshop was his childhood playground. Perhaps the reason he was always keen to have his own space—a workshop. When his wife Niyati bought a bicycle to commute to work in 2008-09, his interest in bicycle design was aroused and he started researching online. Meanwhile, after a short stint at a furniture design company, he set up his own workshop in collaboration with two friends—6mm Designs and Furniture. Interestingly though, it was not a bicycle but a tricycle or a trike that first rolled out of Sharma's workshop. The next invention was what he called a unique Tandem Trike. Both the varieties were an instant hit in Bengaluru, especially with kids, to whom Sharma would give free rides as a reward for doing their homework.