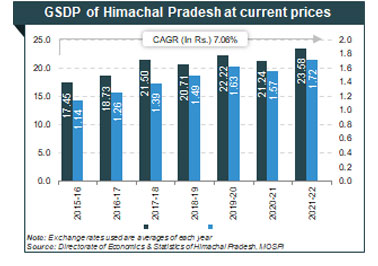 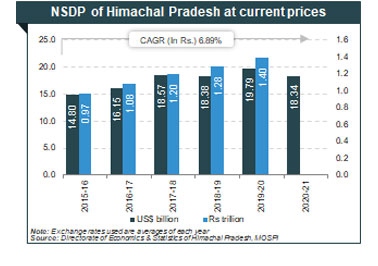 Himachal Pradesh is one of the fastest-growing states in India. Being a sub-Himalayan state, Himachal Pradesh has a varied climate that changes with altitude. Known as the Land of Gods is famous for its topographic diversity and pristine natural beauty.

According to the Department for Promotion of Industry and Internal Trade (DPIIT), the cumulative FDI inflows in Himachal Pradesh were valued at US$ 22.83 million between October 2019 and March 2021.

As of April 2021, Himachal Pradesh had a total installed power generation capacity of 4,155.13 MW, comprising 1,626.39 MW under private utilities, 1,062.21 MW (state utilities) and 1,466.53 MW (central utilities). Himachal Pradesh has immense potential for hydropower as it is naturally blessed with abundant streams and rivers flowing down from towering mountains.

In May 2021, Okaya Power commissioned a 100 KWp hybrid solar plant at its Baddi manufacturing unit, in the state, that was aimed to reduce power consumption by 40% from the grid and generate >144 Mwh energy per year.

In April 2021, National Highways Authority of India (NHAI) awarded a contract to IRB Infrastructure Developers Ltd. (IRB) worth Rs. 828 crore (US$ 113.40 million) to upgrade and rehabilitate to four lane outline to strengthen the Punjab/HP border.

Tourism sector of Himachal Pradesh contributes 7% to the state GDP. Domestic tourist inflow in the state reached 16.83 million in 2019, while foreign tourist arrivals reached 383,000.  As of December 2019, there were 3,679 registered hotels in the state.

In 2020-21, Himachal Pradesh had a total of 58 AICTE-approved institutes. In October 2020, the ‘Strengthening Teaching-Learning and Results for States’ (STARS) project under the new education policy was approved by the Union Cabinet, chaired by the Prime Minister, Mr. Narendra Modi, to assist states in strengthening the school education system. States such as Himachal Pradesh, Rajasthan, Maharashtra, Madhya Pradesh, Kerala and Odisha will be covered under the scheme. The project is funded by the World Bank and is estimated to cost Rs. 5,718 crore (US$ 775.28 million). In September 2020, Himachal Pradesh government announced that National Education Policy, 2020 will be implemented in the state with immediate effect.