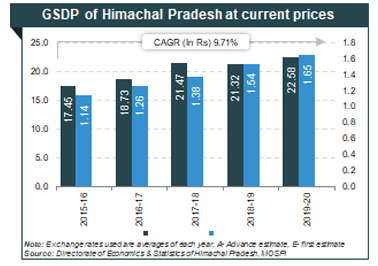 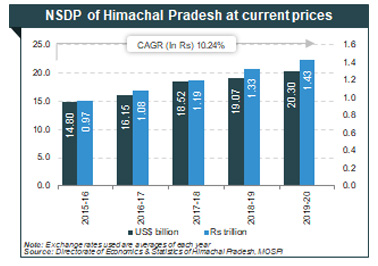 Himachal Pradesh is located in the northern region of India. The state is surrounded by Jammu and Kashmir on the north, Punjab on the west and the south-west, Haryana on the south, Uttar Pradesh on the south-east and China on the east.

As of February 2021, Himachal Pradesh had a total installed power-generation capacity of 4,154.57 MW, comprising 2923.88 MW by hydropower. Himachal Pradesh has immense potential for hydropower as it is naturally blessed with abundant streams and rivers flowing down from towering mountains.

In November 2020, the Union Cabinet approved a proposal for an expenditure of Rs. 1,810 crore (US$ 245.41 million) for the 210 MW Luhri Stage-I hydropower project in Himachal Pradesh on the Satluj River. 758.20 million units of electricity annually will be generated by this project. The project will help create ~2,000 direct and indirect jobs and will contribute to the state's overall socioeconomic growth.

The State Government of Himachal Pradesh offers a wide range of policy and fiscal incentives for businesses under the Industrial Policy, 2017. The state has also undertaken other policies such as Tourism Policy 2005 and IT Policy 2001 for upgradation of these sectors in the state. Himachal Pradesh has announced a Revised Solar Policy 2016 under which it plans to establish 700 MW of solar photovoltaic cell capacity.

Under State Budget 2020-21, the highest increase in allocations was observed in Water Supply, Sanitation, Housing and Urban Development at 33% of the overall budget.

According to the Department for Promotion of Industry and Internal Trade (DPIIT), the cumulative FDI inflows in Himachal Pradesh were valued at US$ 17.67 million between October 2019 and September 2020.