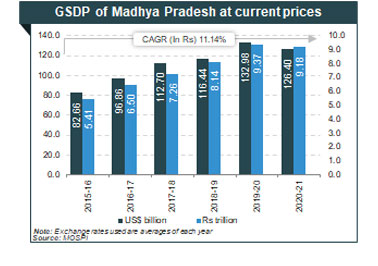 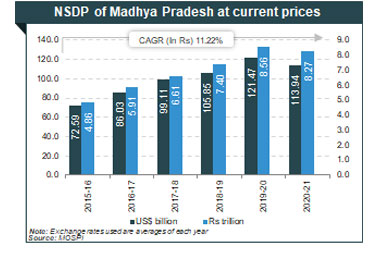 Madhya Pradesh is rich in natural resources - fuel, minerals, agriculture, and biodiversity. It is also the only diamond producing state in the country. Diamond production in the state reached 25,603 thousand tonnes in 2019-20.

The state is rich in natural resources, fuels, minerals, agriculture, and biodiversity. Upcoming theme based special economic zone (SEZs near Jabalpur, industry parks in Indore and food parks at multiple locations aim to promote sectoral growth. The state is rich in minerals and has the highest stone, diamond and copper reserves in India, notwithstanding noteworthy reserves of coal, coal-bed methane, manganese, and dolomite. Further, the state is home to over 280 pharmaceutical units operating in the industrial areas of Dewas, Indore, Pithampur, Mandideep and Malanpur.

Madhya Pradesh State Industrial Development Corporation Limited (MPSIDC) is the nodal agency for industrial growth in the state. It is the central point to coordinate, activate and ensure implementation of mega infrastructure projects.

Exports from the state stood at US$ 6.47 billion in FY21, the total drug formulations, biologicals products exports from Madhya Pradesh accounted for US$ 1,099.97 million, which was 17% of the total exports.

According to the Department for Promotion of Industry and Internal Trade (DPIIT), cumulative FDI inflow in Madhya Pradesh was valued at US$ 282.29 million between October 2019 and March 2021.

93 investment intentions worth US$ 4.42 billion were filed in the state during 2020.

Below are some of the major initiatives taken by the Government to promote Madhya Pradesh as an investment destination: