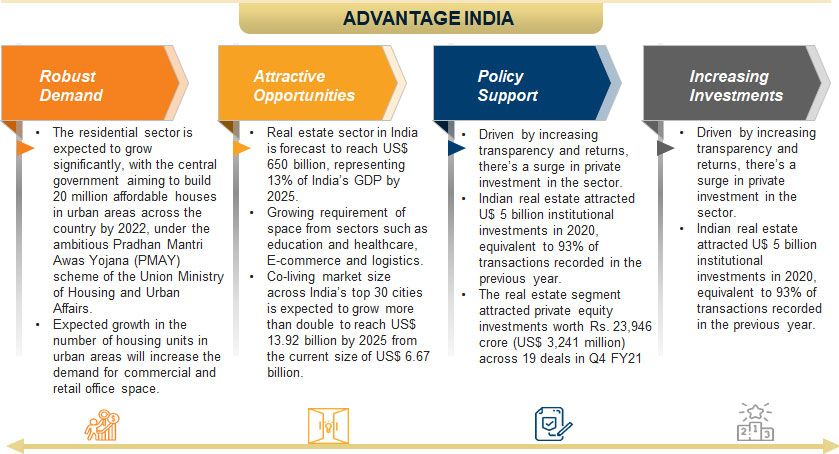 Real estate sector is one of the most globally recognized sectors. It comprises of four sub sectors - housing, retail, hospitality, and commercial. The growth of this sector is well complemented by the growth in the corporate environment and the demand for office space as well as urban and semi-urban accommodations. The construction industry ranks third among the 14 major sectors in terms of direct, indirect and induced effects in all sectors of the economy.

In India, the real estate sector is the second-highest employment generator, after the agriculture sector. It is also expected that this sector will incur more non-resident Indian (NRI) investment, both in the short term and the long term. Bengaluru is expected to be the most favoured property investment destination for NRIs, followed by Ahmedabad, Pune, Chennai, Goa, Delhi and Dehradun.

The office market in top eight cities recorded transactions of 22.2 msf from July 2020 to December 2020, whereas new completions were recorded at 17.2 msf in the same period. In terms of share of sectoral occupiers, Information Technology (IT/ITeS) sector dominated with a 41% share in second half of 2020, followed by BSFI and Manufacturing sectors with 16% each, while Other Services and Co-working sectors recorded 17% and 10%, respectively.

In 2020, the manufacturing sector accounted for 24% of office space leasing at 5.7 million square feet. SMEs and electronic component manufacturers leased the most between Pune, Chennai and Delhi NCR, followed by auto sector leasing in Chennai, Ahmedabad and Pune. The 3PL, e-commerce and retail segments accounted for 34%, 26% and 9% of office space leases, respectively. Of the total PE investments in real estate in Q4 FY21, the office segment attracted 71% share, followed by retail at 15% and residential and warehousing with 7% each.

Retail real estate and warehousing segment attracted private equity (PE) investments of US$ 220 million and US$ 971 million, respectively, in 2020. Grade-A office space absorption is expected to cross 700 msf by 2022, with Delhi-NCR contributing the most to this demand.

Housing launches were 86,139 units across the top eight Indian cities in the second half of 2020. Home sales volume across eight major cities in India jumped by 2x to 61,593 units from October 2020 to December 2020, compared with 33,403 units in the previous quarter, signifying healthy recovery post the strict lockdown imposed in the second quarter due to the spread of COVID-19 in the country.

According to the Economic Times Housing Finance Summit, about 3 houses are built per 1,000 people per year compared with the required construction rate of five houses per 1,000 population. The current shortage of housing in urban areas is estimated to be ~10 million units. An additional 25 million units of affordable housing are required by 2030 to meet the growth in the country’s urban population.

Indian real estate sector has witnessed high growth in the recent times with rise in demand for office as well as residential spaces. Indian real estate attracted U$ 5 billion institutional investments in 2020, equivalent to 93% of transactions recorded in the previous year. Investments from private equity (PE) players and VC funds reached US$ 4.06 billion in 2020. The real estate segment attracted private equity investments worth Rs. 23,946 crore (US$ 3,241 million) across 19 deals in Q4 FY21. Investments in the sector grew 16x compared with Rs. 1,470 crore (US$ 199 million) in Q4 FY20. In value terms, these investments were 80% of that in 2020 and 48% of 2019, according to a report by Knight Frank.

According to the data released by Department for Promotion of Industry and Internal Trade Policy (DPIIT), construction is the third-largest sector in terms of FDI inflow. FDI in the sector (including construction development and construction activities) stood at US$ 42.97 billion between April 2000 and September 2020.

Some of the major investments and developments in this sector are as follows:

Government of India along with the governments of respective States has taken several initiatives to encourage development in the sector. The Smart City Project, with a plan to build 100 smart cities, is a prime opportunity for real estate companies. Below are some of the other major Government initiatives:

The Securities and Exchange Board of India (SEBI) has given its approval for the Real Estate Investment Trust (REIT) platform, which will allow all kind of investors to invest in the Indian real estate market. It would create an opportunity worth Rs. 1.25 trillion (US$ 19.65 billion) in the Indian market in the coming years. Responding to an increasingly well-informed consumer base and bearing in mind the aspect of globalisation, Indian real estate developers have shifted gears and accepted fresh challenges. The most marked change has been the shift from family owned businesses to that of professionally managed ones. Real estate developers, in meeting the growing need for managing multiple projects across cities, are also investing in centralised processes to source material and organise manpower and hiring qualified professionals in areas like project management, architecture and engineering.

The residential sector is expected to grow significantly, with the central government aiming to build 20 million affordable houses in urban areas across the country by 2022, under the ambitious Pradhan Mantri Awas Yojana (PMAY) scheme of the Union Ministry of Housing and Urban Affairs. Expected growth in the number of housing units in urban areas will increase the demand for commercial and retail office space.

The current shortage of housing in urban areas is estimated to be ~10 million units. An additional 25 million units of affordable housing are required by 2030 to meet the growth in the country’s urban population.

The growing flow of FDI in Indian real estate is encouraging increased transparency. Developers, in order to attract funding, have revamped their accounting and management systems to meet due diligence standards. Indian real estate is expected to attract a substantial amount of FDI in the next two years with US$ 8 billion capital infusion by FY22. 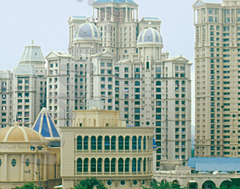 India is the leading real estate investment market in Asia. Construction margins in India are also double that of the world average - a perfect combin...

Overview
In India, the real estate sector is the second-highest employm...

Role of the EIB in Climate and Environmental Sustainability
The Europea...