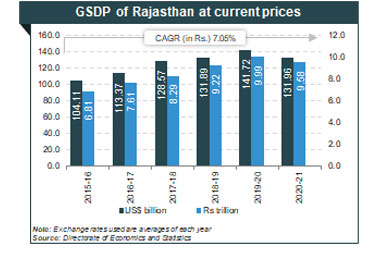 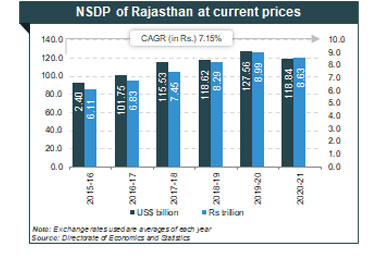 Rajasthan, the largest (area-wise) state in India, is in the north-western part of the subcontinent. It borders six major states in the northern, western, and central parts of India. Rajasthan is a natural corridor between the wealthy northern and the prosperous western states, making it an important trade and commerce centre.

The natural resources, policy incentives, strategic location and infrastructure in the state are favourably suited for investments in sectors such as cement, tourism, agriculture and allied industries, mineral and mineral processing industries.

The state has an agricultural economy with nine agro-climatic zones and various types of soil that help during the cultivation of crops. Food grain production is estimated to have reached 22.80 million tonnes in 2018-19.

The state is the leading producer of cement-grade limestone in India. Production of limestone reached 31.04 million tonnes in April-September 2020.

Bureau of Investment Promotion (BIP) is the nodal agency of the Government of Rajasthan that facilitates investment in various sectors in the state. Rajasthan State Industrial Development and Investment Corporation (RIICO) is the sole agency in the state that develops land for industrial growth. As of November 2019, the state was home to three operational SEZs, four notified SEZs, one SEZ with an in-principle approval, and five SEZs with formal approvals.

According to the Department for Promotion of Industry and Internal Trade (DPIIT), Foreign Direct Investment (FDI) inflow in the state stood at US$ 461.40 million between October 2019 and March 2021.