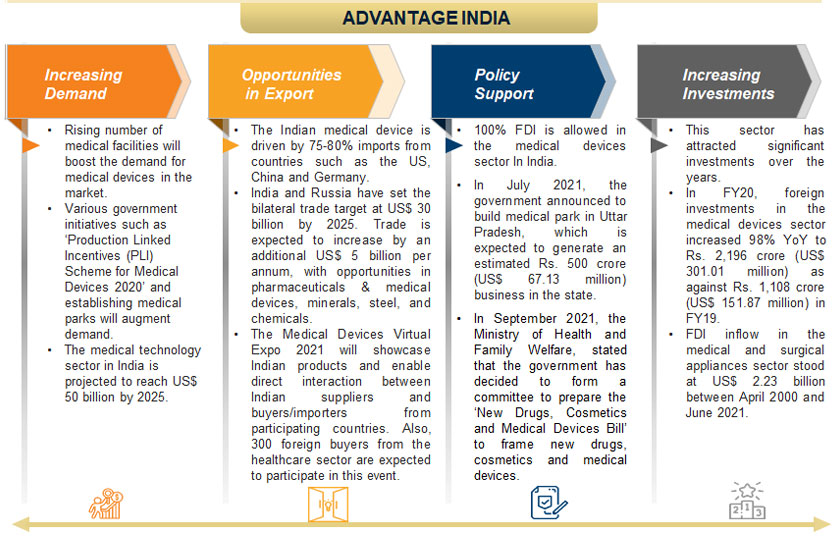 At present, many medical device manufacturers (domestic and international) are chasing this massive under penetration of medical devices in India as a significant growth opportunity.

The Government of India (GOI) has commenced various initiatives to strengthen the medical devices sector, with emphasis on research and development (R&D) and 100% FDI for medical devices to boost the market. FDI inflow in the medical and surgical appliances sector stood at US$ 2.23 billion between April 2000 and June 2021.

By 2025, the Indian market for medical equipment is predicted to increase from US$ 11 billion to ~US$ 50 billion.

The Indian medical devices sector is estimated to be worth ~US$ 10 billion in 2021.

The Medical Devices Virtual Expo 2021 will showcase Indian products and enable direct interaction between Indian suppliers and buyers/importers from participating countries. Also, 300 foreign buyers from the healthcare sector are expected to participate in this event.

Some major investments and developments in medical devices are as follows:

Achievements in the Sector

In India, medical device manufacturing is costly because it requires high investments in scientific facilities. To combat this cost, the Government of Andhra Pradesh is establishing the Andhra Pradesh MedTech Zone (APMTZ), which will house all capital-intensive scientific facilities, laboratories, etc., and will be leased to manufacturers in Vishakhapatnam. This initiative will help decrease the cost of good-quality products.

Policy makers in India will need to set out an action plan to reduce the country’s dependency on medical devices/technology imports. At present, NITI Aayog is reportedly drawing up a strategic road map for medical devices similar to the incentive package that gives sizable capital subsidies for the electronics business, which helps boost local production of cell phones in the country.

Medical device companies should develop India as a manufacturing hub for domestic and international markets, undertake India-based innovation in combination with indigenous manufacturing, collaborate across the Make in India and Innovate in India schemes, and produce Low to Medium technology products to cater to the underpenetrated domestic markets. 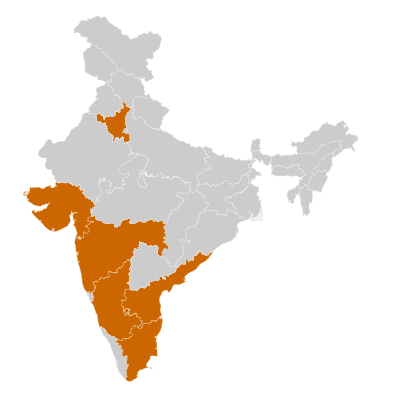 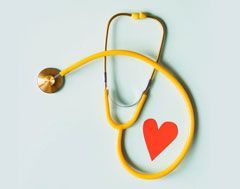 The healthcare and medical device sectors have grown significantly in the last decade. There is a huge gap in the current...