The Oil and Gas industry is expected to attract US$ 25 billion investment in exploration and production by 2022. 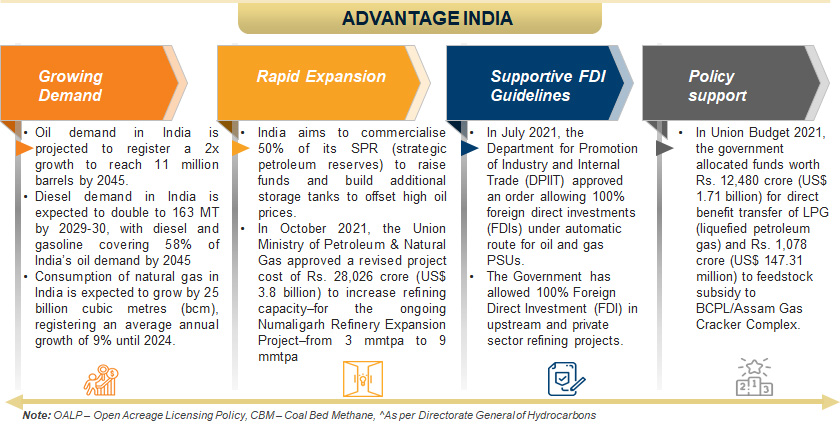 Oil and gas sector is among the eight core industries in India and plays a major role in influencing decision making for all the other important sections of the economy.

India’s economic growth is closely related to its energy demand, therefore, the need for oil and gas is projected to grow more, thereby making the sector quite conducive for investment.

The Government has adopted several policies to fulfil the increasing demand. It has allowed 100% Foreign Direct Investment (FDI) in many segments of the sector, including natural gas, petroleum products and refineries among others. Today, it attracts both domestic and foreign investment as attested by the presence of Reliance Industries Ltd (RIL) and Cairn India.

According to IEA (India Energy Outlook 2021), primary energy demand is expected to nearly double to 1,123 million tonnes of oil equivalent, as the country's gross domestic product (GDP) is expected to increase to USD 8.6 trillion by 2040.

As of September 01, 2021, the sector’s total installed provisional refinery capacity stood at 246.90 MMT and IOC emerged as the largest domestic refiner, with a capacity of 69.7 MMT.

According to the International Energy Agency (IEA), consumption of natural gas in India is expected to grow by 25 billion cubic metres (bcm), registering an average annual growth of 9% until 2024.

According to the International Energy Agency (IEA), India’s medium-term outlook for natural gas consumption remains solid due to rising infrastructure and supportive environment policies. Industrial consumers are expected to account for ~40% of India’s net demand growth. The demand is also expected to be driven by sectors such as residential, transport and energy.

According to the data released by Department for Promotion of Industry and Internal Trade Policy (DPIIT), FDI inflows in India’s petroleum and natural gas sector stood at US$ 7.96 billion between April 2000 and June 2021.

Following are some of the major investments and developments in the oil and gas sector:

Some of the major initiatives taken by the Government of India to promote oil and gas sector are:

Energy demand of India is anticipated to grow faster than energy demand of all major economies on the back of continuous robust economic growth. India’s energy demand is expected to double to 1,516 Mtoe by 2035 from 753.7 Mtoe in 2017. Moreover, the country’s share in global primary energy consumption is projected to increase by two-fold by 2035.

India’s oil demand is projected to rise at the fastest pace in the world to reach 10 million barrels per day by 2030, from 5.05 million barrel per day in 2020.

As per preliminary data of gasoline sales, fuel consumption in India registered growth in June 2021 and is expected to further recover by end-2021. Gasoline sales by state refiners stood at 2.12 million tonnes in June 2021, registering an increase of 5.7% YoY.

India is set to expand India’s natural gas grid to 34,500 kms by adding another 17,000 km gas pipeline. The regasification capacity of the existing 42 MMT per annum will be expanded to 61 MMT per year by the year 2022.