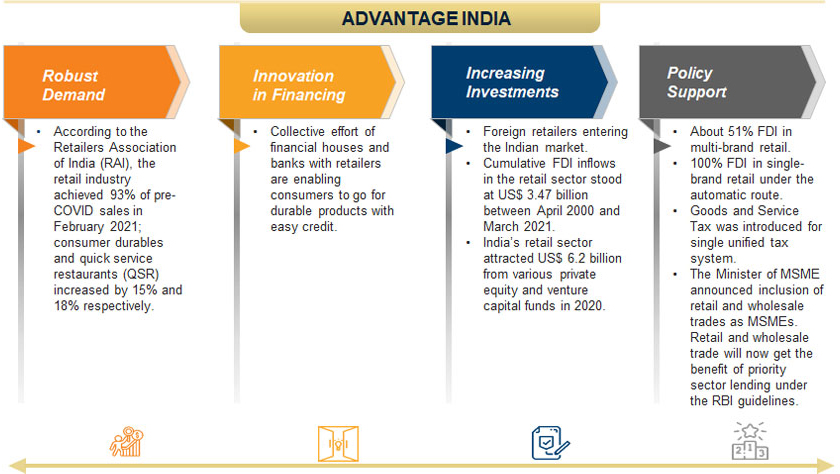 Indian retail industry has emerged as one of the most dynamic and fast-paced industries due to the entry of several new players. Total consumption expenditure is expected to reach nearly US$ 3,600 billion by 2020 from US$ 1,824 billion in 2017. It accounts for over 10% of the country’s gross domestic product (GDP) and around eight% of the employment. India is the world’s fifth-largest global destination in the retail space.

India ranked 73 in the United Nations Conference on Trade and Development's Business-to-Consumer (B2C) E-commerce Index 2019. India is the world’s fifth-largest global destination in the retail space and ranked 63 in World Bank’s Doing Business 2020.

As per Forrester Research, in 2020, India's retail sector was estimated at US$ 883 billion, with grocery retail accounting for US$ 608 billion. The market is projected to reach ~US$ 1.3 trillion by 2024.

According to the Retailers Association of India (RAI), the retail industry achieved 93% of pre-COVID sales in February 2021; consumer durables and quick service restaurants (QSR) increased by 15% and 18% respectively.

After an unprecedented decline of 19% in the January-March 2020 quarter, the FMCG industry displayed signs of recovery in the July-September 2020 quarter with a y-o-y growth of 1.6%. The growth witnessed in the fast-moving consumer goods (FMCG) sector was also a reflection of positivity recorded in the overall macroeconomic scenario amid opening of the economy and easing of lockdown restrictions.

The new-age logistics players are expected to deliver 2.5 billion Direct-to-Consumer (D2C) shipments by 2030. Online used car transaction penetration is expected to grow by 9x in the next 10 years. During the festival period in 2020, Amazon, Flipkart and various vertical players sold goods worth US$ 9 billion despite the pandemic onslaught.

The Indian retail trading has received Foreign Direct Investment (FDI) equity inflow totalling US$ 3.47 billion during April 2000-March 2021, according to Department for Promotion of Industry and Internal Trade (DPIIT).

With the rising need for consumer goods in different sectors including consumer electronics and home appliances, many companies have invested in the Indian retail space in the past few months.

In July 2021, DP Retail, a subsidiary of Darwin Platform Group of Companies (DPGC), entered the retail space with the launch of its first megastore in Andheri, Mumbai. The company would be opening other self-owned exclusive stores at five locations in Mumbai. The launch signifies the DPGC’s ambitious plan to leverage potential of the Indian retail space. DP Retail plans to invest Rs. 1,000 crore (US$ 134.43 million) in FY21 to expand in other cities and allocated Rs. 100 crore (US$ 13 million) towards market penetration across the omnichannel retail business (including an innovative franchise model).

In July 2021, Dyson announced to increase its retail presence to 12 stores.

In 2021, Lenskart received US$ 315 million funding from Falcon Edge Capital, Temasek Holdings, KKR. The company plans to use the proceeds to expand its retail footprint in Southern India.

In May 2021, Big Bazaar rolled out its two-hour delivery service in small cities, such as Bhopal, Mangalore, Raipur, Ranchi, Guwahati, Kanpur, Lucknow, and Varanasi, and recorded a boost in orders over the past weeks.

In April 2021, Flipkart expanded its hyperlocal delivery service Quick to six new cities including Delhi, Gurugram, Ghaziabad, Noida, Hyderabad, and Pune as the demand for essential goods on e-commerce platforms surges amid the second wave of the pandemic.

In March 2021, AP Group announced an expansion plan for their Italian brand – Just Cavalli in India with the launch of 200 offline stores in 2021.

In March 2021, Realme announced to expand retail footprint in India with flagship stores; it is planning to launch its first flagship store (over a 10,000 sq. ft. area) in Gujarat.

In March 2021, ASICS expanded its retail concept in India with a new store in Bengaluru.

The Government of India has taken various initiatives to improve the retail industry in India. Some of them are listed below:

E-commerce is expanding steadily in the country. Customers have the ever-increasing choice of products at the lowest rates. E-commerce is probably creating the biggest revolution in retail industry, and this trend is likely to continue in the years to come. Retailers should leverage digital retail channels (E-commerce), which would enable them to spend less money on real estate while reaching out to more customers in tier II and tier III cities.

RETAIL MARKET IN INDIA (US$ BILLION)

Overview
Financial inclusion is defined as the process of ensuring acce...

Overview
A population of over 1 billion people and rising disposable in...

The Vehicle Scrappage Policy, launched on August 13, 2021, is a government-funded programme to ...

Overview
Evolution of the Indian pharma industry began in the 20th...

A foreign trade policy provides a set of guidelines that help a country achieve its domestic pr...