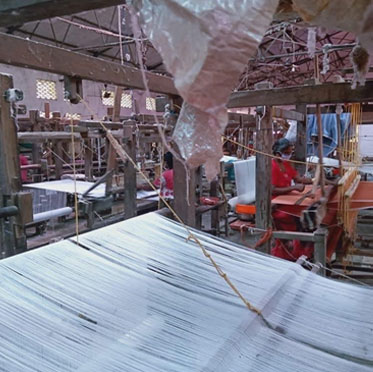 Chendamangalam is a small town on the banks of river Periyar 30 km away from the main city of Ernakulam. It is a thriving centre of trade and exchange near the ancient seaport Muriris. This place is also known as the home for Malabari Jews although now the raw materials come from Surat, Gujarat but Chendamangalam weavers are famous for its on crafting and using their hadloom to generate beautiful mundus and dhotis. Weavers from Andhra and Tamil Nadu established the weaving centre here.

Chendamangalam is famus for set mundus which became good source of employment after forming of cooperative Society in 1955 during the Travancore Cochin Societies act.

Cottom Brought from Gugarat is first Soaked into water to remove the impurities and chemical residue and then boiled for better finishing at 200ºC for 24 hours. Then they are washed ageain and oxidized to gain desired colours then left for drying for one day and three day in sunlight. After all these process, it is put on handloom mills.

Around 10,000 weavers, 4 to 5 thousands households and especially the population in gram Panchayat are part of this community. View Vendor List...

The Pakkali land in 33 Panchayat municipalities and one city corporation are in Allepy, Ernakulam and Thrissur district of Kerala. The uniqueness about the Pokkali rice cultivation in Ernakulam is that it has some biotic relationship with the prawn cultivation, half month of prawn cultivation provide the fertile land for rice. Inthis manner, cultivators are able to stay engaged throughout the year. Pokkali Rice is medium bold in shape with very good cooking quality, special taste, average protein content of 7.5-8.7% and intermediate (above 20%) amylose content.

The rice is found in bold medium to gold shape with a very good cooking quality, special taste and with a good amount of protein percentage. It is not only organic way of farming but also create a nutrient rich culture across Kerala.

It grows in very highly acidic soil with pH been 3 to 4.5, yield potential of thousand to 1500 kg per hectare and it is mainly cultivated in June to September October and after that the traditional prawn cultivation take place.

ChootuPokkali, Chettivirippu, Cheruvirippu, Kuruva, Anakodan, Eravapandy, Bali, Orkayama, Orpandy and Pokkali are the traditional cultivars prevalent in this tract. It is very favourable for the marketing in this part of the country because its character is highly eco-friendly, protein rich, good for the patient suffering from cholera. Even the international Rice research Institute Philippines has developed many high yielding varieties by using this gene of Pokkali rice. View Vendor List... 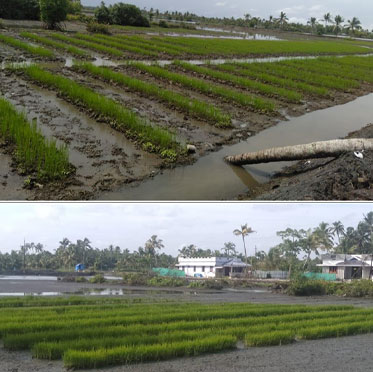 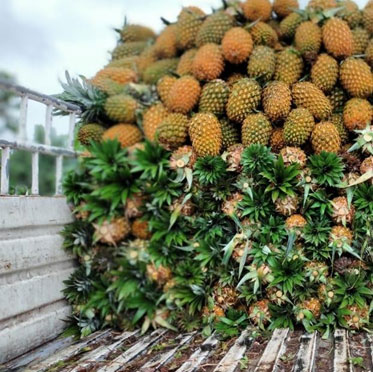 Vazhakulam is the centre of pineapple trade in Kerala accounting for about 80% of Kerala’s pineapple harvest travel to entire country. Vazhakulam pineapple is located in Vazhakulam Panchayat in muvattapuzha division, around one hour away from Kochi in Ernakulam. The average fruit weight is 1300-1600 gms. The fruit is having a pleasant aroma, having a slightly conical shape fruit ‘eyes’ deeply placed, fruit flesh is crisp and golden yellow in color, juice is sweet with 14-160 brix and its acidity is 0.50 – 0.70%. It is a good soure of carotene, vatamins and minerals.

The socio-cultural history of Vazhakulam begun in the 1940s with a small scale production. However, with the favourable climate conditions, it turned into a commercial venture within 10 years.

Vazakulam pineapple has a shelf life of 15 to 20days to be consumed as a fresh fruit. It is grown in 10,000 ha in the district of Ernakulam, Kottayam and parts of Pathanamthitta district and even in the lower stretches of Idukki district.

Vazhakulam is the biggest pineapple market in India with more than 15 years of excellence. In 2009, it received a GI tag and the fruit has a pleasant aroma and slightly conical in shape and fruit flash is very crisp and golden yellow in colour. Because of its high sugar content, it is quite famous for the domestic consumption as well. View Vendor List...

High sweetness without salty taste, high content of iron, less sodium content, less insoluble impurities, organic method of production and dark brown colour are the unique characters of this traditional sharkara. It is believed that the area of Marayoor in Kerala has a history dating back to the Mahabharata where the area was used by the Pandavas to hide during their vanavasam and hence the place was named as Maranjirunnayoor meaning ‘the place of hiding’ which in due course of time became Marayoor.

Initially, much of the focus was on rice cultivation and it was called the rice bowl of high ranges but later due to water scarcity this changed to sugarcane cultivation that required less water. Even today, the cultivation is mostly done by farm labourers who come from Tamil Nadu or those who belong to the Muthuva tribal group. View Vendor List... 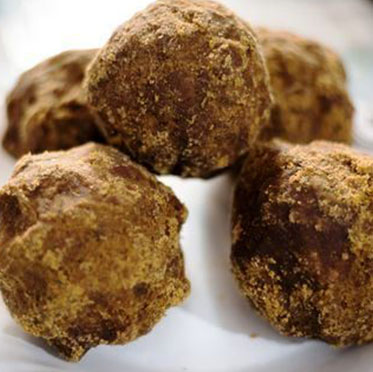 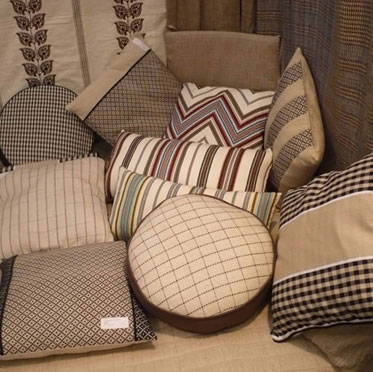 Kannur has a centuries-old history of weaving. It is known as the Land of Looms and also as the Manchester of Kerala. Weaving in Kannur has been in vogue for about the past 400 years. In recent history, a small handloom factory was started in Kannur in 1852 and it was called the Basal Mission. Over the years, some of the handloom factories refashioned themselves into powerloom units while others remained as traditional handloom units.

From the 1960s, Cannanore Home Furnishings began to make its impact on the international market as well. Exports of these textile items began to take off and the producers also started adapting to the needs and tastes of their foreign clientele. This trend continues even now in Kannur.

The specialty of Cannanore Home Furnishings fabrics and Made ups are the compact structure and texture of cloth, unique colour combinations, wide width, skilled craftsmanship and colour fastness due to excellent dyeing quality. The land has very pure natural soft water source throughout the year, which is a boon for perfect dyeing of the first part of a very important process in Textiles. The products are distinctly recognizable due to the richness and the feel of life in it. With the traditional method by experienced hands, they can get any shade. The dyed colours can stand any international test requirements. View Vendor List...

Kaipad rice cultivation is the traditional organic rice produced in the saline prone (brackish water) coastal rice tracts in the northern districts of Kerala, which are Kozhikode, Kannur and Kasaragod. The GI registration certificate for Kaipad rice was obtained on March 3, 2014.

Today, the local name of ‘Kaipad’ is derived from ‘Kayalpadam’ (with ‘Kayal’ meaning backwater and ‘padam’ being another term for paddy fields)

While most cultivators are small and marginal farmers, Kaipad rice tracts follow a purely natural form of cultivation relying on the monsoon and sea tides. A single crop of rice is cultivated, on mounds, in a low to medium saline phase of the production cycle from June to October. During the high saline phase from November to April, traditional aquaculture is followed in these tracts with fish or shrimp farming. The rice, fish and shrimp farming is carried out in traditional organic way – without the use of any chemical fertilizer or pesticide.

The rice has excellent nutritive value and fetches a higher price due to its distinctive taste and nutritional value. There is the local tradition in which Kaipad rice cultivators gift rice flakes when they visit the homes of those outside these regions. View Vendor List... 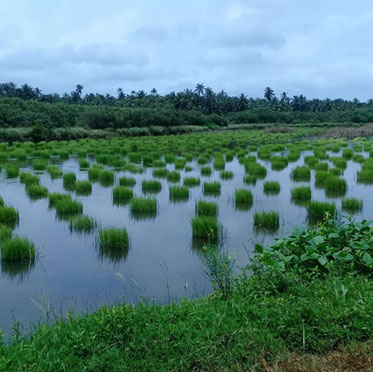 Nilambur Teak is the first forest produce to receive GI tag in the entire country. Nilambur teak is the teak wood obtained from the forest areas, plantation and homesteads in Nilambur Taluk and Edavanna panchayat in Ernad Taluk of Malappuram district, Kerala. The rich alluvial deposits in the river banks of Chaliyar river enhance the soil fertility and thus enhance the quality of Nilambur teak. View Vendor List... 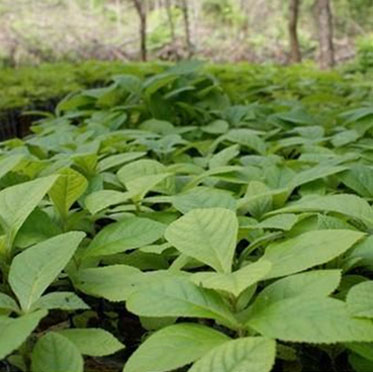 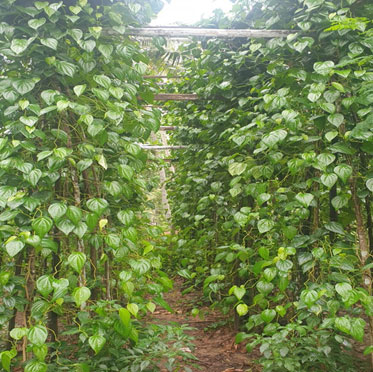 Tirur Betel Leaf is a kind of betel leaf cultivated in Tirur and nearby areas of district of Malappuram. This is also known as ‘Green Gold of India’. Tirur, Tanur, Tirurangadi, Kuttippuram, Malappuram and Vengara are the block panchayats in Malappuram District are famous for cultivation of Tirur betel leaf. The red laterite soil in the mostly U shaped Midland area lies between coastal plains in the west side and Western Ghats in the east side provides favourable conditions for the cultivation of Tirur Betel Leaf. View Vendor List...