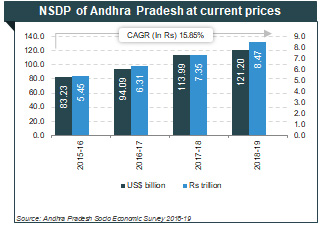 The erstwhile state of Andhra Pradesh has been bifurcated into two states, Telangana and residuary Andhra Pradesh (Seemandhra), by the Andhra Pradesh Reorganisation Act, 2014 or the Telangana Act. The act consisted of the aspects of division of assets and liabilities, the boundaries of the proposed new states and status of the capital city Hyderabad after the separation of the state.

Merchandise exports from Andhra Pradesh stood at US$ 14.08 billion in 2018-19 and reached US$ 10.68 billion during April-December 2019. Andhra Pradesh was home to 20 operational SEZs, 32 SEZs with formal approvals, four SEZs with in-principle approval and 27 notified SEZs, as of February 2020.

Andhra Pradesh has been one of the foremost states to have developed sector-specific policies. Forming industrial clusters and developing infrastructure, such as biotech parks, textile parks and hardware parks, has been the state's key strategy to attract investments in various industries.

According to the Department for Promotion of Industry and Internal Trade (DPIIT), FDI inflows in Andhra Pradesh between April 2000 and September 2019 reached US$ 18.98 billion.

Natural resources, policy incentives and infrastructure in the state are favourably suited for investments in major sectors such as drugs and pharmaceuticals, biotechnology, IT and ITeS, mines and minerals, textiles, leather and tourism.

Seemandhra, comprising Rayalaseema and coastal Andhra, has most of the power projects of undivided Andhra Pradesh. Coal based power plants are mostly located in the state due to proximity to the ports. The Visakhapatnam port ranks fourth in terms of port traffic in India. It handled 65.30 million tonnes of traffic during 2018-19. Traffic handled during April-February 2019-20 reached 66.74 million tonnes.

The Union Government has planned to develop metro rail projects at three locations in the state, including Visakhapatnam, Guntur and Vijayawada. The projects have received approval and now will be going to source funds.

On November 17, 2019, ports of Visakhapatnam and Ranong in Thailand entered in joint venture to explore business opportunities.