India's gems and jewellery market contributed around 7% to GDP and 10-12% share in the total merchandise exports.

*In September 2021, Malbar Group invested Rs. 750 crore (US$ 100 million) in a gold refinery and jewellery unit in Hyderabad.

*India has signed an FTA with the UAE which will further boost exports and is expected to reach the target of US$ 52 billion.

*The Government has reduced custom duty on cut and polished diamond and colored gemstones from 7.5% to 5% and NIL.

Growth in exports is mainly due to revived import demand in the export market of the US and fulfilment of orders received by numerous Indian exhibitors during the Virtual Buyer-Seller Meets (VBSMs) conducted by GJEPC.

India has 10 special economic zones (SEZ) for gems & jewellery. These zones have more than 500 manufacturing units, which contribute 30% to the country’s total exports.

The Government has permitted 100% FDI in the sector under the automatic route, wherein the foreign investor or the Indian company do not require any prior approval from the Reserve Bank or Government of India. The Government has made hallmarking mandatory for gold jewellery and artefacts and a period of one year is provided for its implementation.

As per Union Budget 2021, the Gem and Jewellery Export Promotion Council has proposed a reduction in import duty on cut and polished diamonds to 2.5%, from the existing 7.5%, in order to double exports of gems & jewellery to US$ 70 billion by 2025.

Cumulative FDI inflows in diamond and gold ornaments in India stood at US$ 1,213.05 million between April 2000-March 2022, according to the Department for Promotion of Industry and Internal Trade (DPIIT).

The Indian jewellery business saw a 60% increase in the second quarter of this fiscal year compared to the same period in FY20, according to rating agency ICRA.

Gem & Jewellery exports up 4.4% during April-August...

India will be the fourth-largest gold recycling country in 2021, recycling 75 tonnes, or 6.5% of all gold recycled globally, according to a recent report by the World Gold Council (WGC).

The comprehensive trade pact between India and the UAE will support huge job creation and boost domestic economic growth, as per Mr. Piyush Goyal, Minister of Commerce and Industry, Consumer Affairs, Food and Public Distribution and Textiles.

Major Hubs for Gems and Jewellery 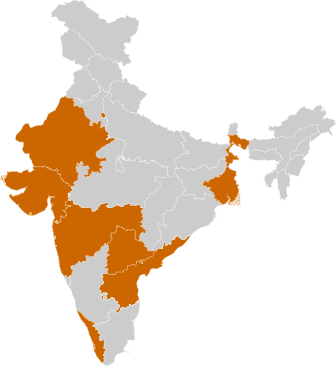 India is the world's largest consumer of diamonds.