India's coal reserves are the fourth largest in the world. Additionally the country is also the second largest coal importer in the world.

* Power and cement industries also aiding growth in the metals and mining sector.

* According to Directorate General of Commercial Intelligence & Statistics, in FY22 (until August 2021), iron ore exports reached US$ 2.23 billion, registering an increase of 21.8% YoY.

* In July 2021, the Odisha government approved five key industrial projects worth Rs. 1.46 lakh crore (US$ 19.60 billion) that are expected to boost capacity of steel production by 27.5 million tonnes.

* In Union Budget 2021, the government reduced customs duty to 7.5% on semis, flat and long products of non-alloy, alloy and stainless steels to provide relief to MSMEs.

* To boost recycling of copper in India, the government announced reduction of import duty on copper scrap from 5% to 2.5% in the Union Budget 2021.

* India holds a fair advantage in cost of production and conversion costs in steel and alumina.

Rise in infrastructure development and automotive production are driving growth in the metals and mining sector in India. India has a vast mineral potential with mining leases granted for a longer duration of 50 years. As of FY22, the number of reporting mines in India were estimated at 1,245, of which reporting mines for metallic minerals were estimated at 525 and non-metallic minerals at 720.

India is the world's second-largest coal producer as of 2021.

Coal production by the Singareni Collieries Company Limited (SCCL), captive mines and other mines in FY22 (until October) was 35.24 MT, 42.1 MT and 2.62 MT, respectively.

In July 2021, India shipped its first coal export to Rampal Power Plant in Bangladesh, giving a boost to the country’s coal exports.

According to official data, in the first quarter of FY22, iron ore exports reached US$ 1.7 billion, registering an increase of 168% YoY.

Iron ore production in the country stood at 189 million tonnes in FY21. According to Directorate General of Commercial Intelligence & Statistics, in FY22 (until August 2021), iron ore exports reached US$ 2.23 billion, registering an increase of 21.8% YoY.

To increase availability of iron ore in India, the government took several initiatives, such as ‘Mining and Mineral Policy’ reforms, to ramp up production and maximum capacity utilisation by government mining companies. For example, SAIL, with the approval to sell 25% fresh fines and 70 MT dumps and tailings, accelerated sale of iron ore.

Demand for metal and metal products is rising in the domestic market, with India focusing to expand its domestic manufacturing.

The steel production in India is registering strong growth on the back of firms (such as Tata Steel) commissioning new projects.

In November 2021, JSW Steel announced that the company registered a 6% YoY surge in crude steel production at 1.42 million tonnes in October 2021.

In May 2021, ArcelorMittal Nippon Steel (AMNS) signed a contract with Total (a France-based energy company) for supply of up to 500,000 tons of liquefied natural gas (LNG) per year until 2026.

In June 2021, the Union Cabinet, chaired by the Prime Minister Mr. Narendra Modi approved the memorandum of understanding (MoU) to be signed between the Ministry of Mines and the Secretariat of Mining Policy of the Ministry of Productive Development of the Argentine Republic. The MoU will provide an institutional mechanism for cooperation in the field of mineral resources.

In March 2021, Coal India Ltd. (CIL) approved 32 new coal mining projects, of which 24 are expansion of the existing projects and the remaining are greenfield. Estimated cost of the project is Rs. 47,000 crore (US$ 6.47 billion).

In February 2021, two new iron ore mines were inaugurated in Odisha, with a production capacity of 15 lakh tonnes per month and ~275 million tonnes of consolidated iron ore reserves. These mines will bring in ~Rs. 5000 crore (US$ 679.28 million) in annual revenue for the state and employment opportunities for locals.

In February 2021, CIL signed a contract with Belaz, a Belarus-based mining equipment manufacturer, for procurement of dumpers with an investment amount worth Rs. 2,900 crore (US$ 393.98 million).

In July 2021, the Odisha government approved five key industrial projects worth Rs. 1.46 lakh crore (US$ 19.60 billion) that are expected to boost capacity of steel production by 27.5 million tonnes.

Government of India has allowed 100% Foreign Direct Investment (FDI) in the mining sector and exploration of metal and non-metal ores under the automatic route, which will propel growth in the sector. Power and cement industries also aiding growth in the metals and mining sector. Given the strong growth expectations from residential and commercial building industry, demand for iron and steel is set to grow.

In September 2021, India and Australia participated in a joint working group (JWG) meeting on ‘coal and mines’ to strengthen bilateral collaboration in the coal sector.

In September 2021, Union Cabinet approved the memorandum of understanding between the Geological Survey of India (GSI) and the Joint Stock Company Rosgeologia, Russia, in the area of geosciences.

In Union Budget 2021, the government reduced customs duty to 7.5% on semis, flat and long products of non-alloy, alloy and stainless steels to provide relief to MSMEs.

To boost recycling of copper in India, the government announced reduction of import duty on copper scrap from 5% to 2.5% in the Union Budget 2021.

India’s steel demand will grow by roughly 10% in 2022, according to Moody's Investors Service.

NMDC became the first Indian company to cross the milestone of producing more than 40 million tonnes (MT) of iron ore.

Centre aims to accelerate the growth of the mining sector with an average growth rate of 8.5% between 2018-23.

India’s total iron ore production increased by 27% between April 2021-January 2022 compared to the same period in the prior year.

India to benefit from increased global demand for metals, foodgrains...

Indian exports could likely benefit from the increased global demand for steel, aluminium and foodgrains, as per ICICI Securities. 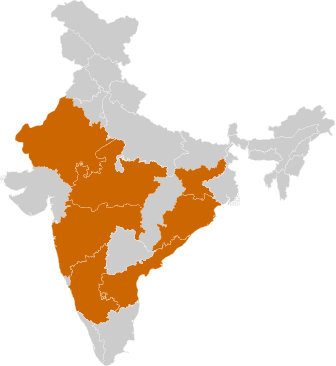