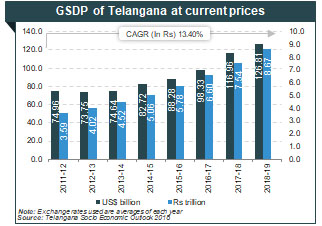 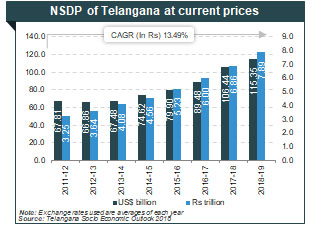 Telangana state was formed in June 2014 post the split of erstwhile Andhra Pradesh. The earlier capital city of Hyderabad is part of Telangana. The state holds an advantage as it possesses readymade capital with necessary infrastructure and ecosystem. Hyderabad was ranked second among the top 20 global cities in JLL’s City Momentum Index (CMI) 2019.

The capital city of Hyderabad (also the capital for earlier larger Andhra Pradesh state) is a hub for information technology (IT) and pharmaceutical sectors. IT and ITeS exports from Telangana grew at a CAGR of 10.55 per cent to Rs 1,09,219 crore (US$ 15.63 billion) in 2018-19.

As of November 2019, Telangana had 30 operational SEZs, 56 notified SEZs and 63 formally approved SEZs.

Some of the major initiatives taken by the government to promote Telangana as an investment destination are: