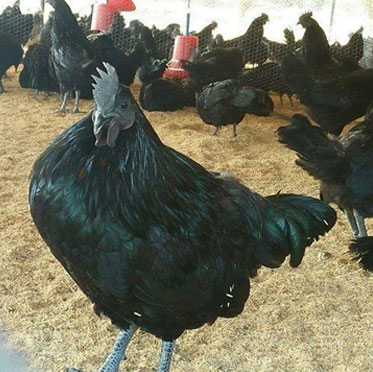 Kadaknath Black Chicken Meat was granted Geographical Indication in 2018. Kadaknath, locally known as kali masi, is black inside-out. The bird exhibits intense black colouration which is due to the deposition of melanin pigment in the connective tissue of organs and in the dermis, a genetic condition known as “Fibro-melanosis”.

The black meat of Kadaknath is rich in protein and high in iron and amino acids and is popular among the local population because of its black flesh being very delicious and soft. It is also known for its adaptability, given its high tolerance level to conditions of extreme heat and cold, thereby being suitable for extreme climatic conditions.

The tribal also value the breed for its cultural and health values besides considering it as sacred. They use the Kadaknath blood in the treatment of chronic diseases in human beings and its meat is believed to be aphrodisiac. The eggs are highly nutritious for old people because of low cholesterol content and free amino acids (18 kinds of amino acids including the 8 essential amino acids for the human body) besides Vitamin B1, B2, B6 and B12.

Kadaknath Black Chicken Meat has been reared by tribal over a long period of time. The Kadaknath bird is grown in the Madhya Pradesh districts of Jhabua, Dhar, Barwani and Alirajpur and includes adjoining the adjoining areas of Rajasthan and Gujarat over an area of about 800 sq. miles. View Vendor List... 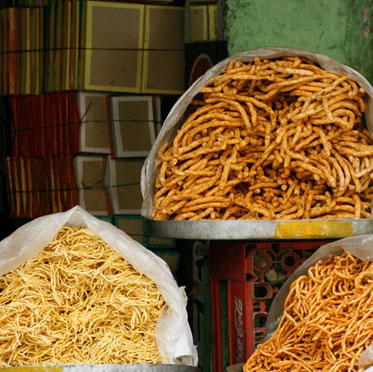 The only GI product of Bikaner is ‘Bikaneri Bhujia’. It covers the entire area of Bikaner district that includes all of its 9 tehsils. The origin of Bhujia in Bikaner dates back to 1877 AD when Maharaja Shri Dungar Singh was ruling the state. Then, the item was manufactured as a special variety in the name of ‘Dungar Shahi Bhujia’ especially for the guests of the king. As time passed by the industry emerged as a main livelihood of the inhabitants in the district.

The main reason for the spread of the industry in this region is attributed to the fact that the district in drought prone with scarcity of electricity and water.

The main raw material for manufacturing Bhujia is moth, which is grown in the arid zone of Rajasthan in the sandy soil under rainfed conditions and the saline water available from the deep wells. Both of these are natural gifts to the region. The water being saline with high chloride value that adds to the crispiness, taste and overall flavor of the Bhujia that cannot be replicated elsewhere. View Vendor List... 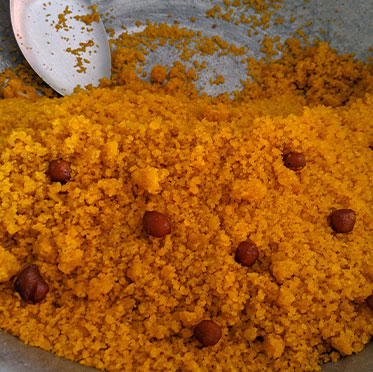 Word Mihidana is derived from two words, mihi – fine and dana – grain, meaning ‘fine grain’. This sweet dish is prepared by using ingredients such as Gobindobhog rice, Kaminibhog rice, sugar, saffron, gram flour, ghee. The Gobindobhog rice is short grain, aromatic, sticky rice with a buttery taste and is traditionally used in offerings to the family deity of the Setts of Kolkata- Govindajiu.

The human skill to prepare Mihidana has been acquired through generations. Mihidana got registered as GI on March 13, 2015 under Geographical indication number 526, falling in the class – 30 – in food stuff. View Vendor List...

Sitabhog, a sweet dish resembling rice or seviaan, is made up of ingredients namely cottage cheese (Chhana), gram flour or besan, Gobindobhog rice flour, sugar, bay leaves, cloves, ghee. It looks as if white rice is served with small pieces of Gulab Jamuns. These small Gulab Jamuns are made up of flour, milk powder and Ghee and are known as Nikhuti.

A special starch has been developed by scientists that increase its shelf life. As such, the shelf life of Sitabhog is just one day and therefore, transporting it to other parts of India becomes difficult without proper packaging. Sitabhog was registered on March 13, 2015 under Geographical indication number 525. View Vendor List... 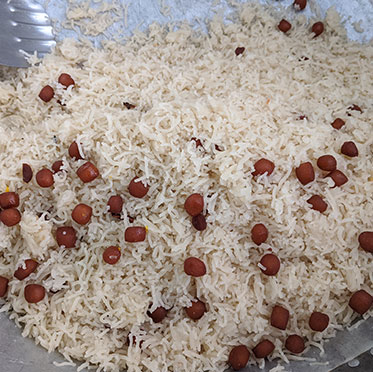 Joynagar Moa is one of those few Bengali delicacies of Bengal that have managed to keep it original form and texture intact even today. It is a famous mouth-watering seasonal sweet delicacy of West Bengal produced mainly during winter. It is prepared from Kanakchur Khoi an aromatic rice and gur (date palm jaggery) and gawa ghee (a type of clarified butter made from cow's milk), cardamom, cashew, rasins and posto (poppy seed).

This gur which is unique in its place of origin Joynagar. This gur is the core and binder of popped rice and other condiments which constitute the round shaped Joynagar Moa. The flavour and sweetness of this gur make this genre of Moa - a popular and lovable combination of taste and aroma with a long tradition.

This variety of Moa originated in Joynagar city of South 24 Parganas district in the Indian State of West Bengal. Joynagar Moa Nirmankari Society has obtained Geographical Indication Registration for Joynagar Moa in 2015. For a long time, this sweet Moa of Joynagar has impressed many people, not only in different district of West Bengal but also in other states by its sweet scent, flavor and quality. View Vendor List... 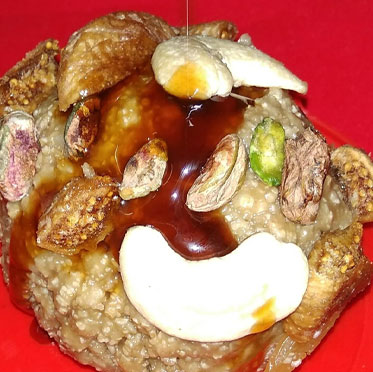