India is the second largest market for E-learning after the US. The sector is expected to reach US$ 1.96 billion by 2021 with around 9.5 million users. 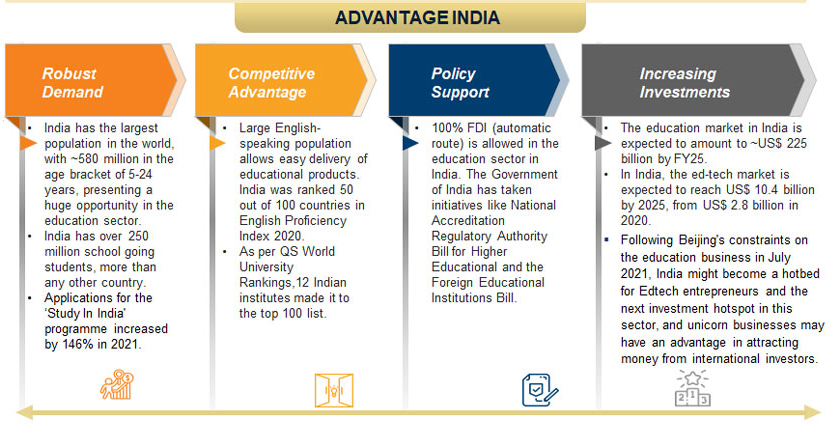 India’s education sector offers a great opportunity with ~26.31% of India’s population in the age group of 0 to 14 years. Education sector in India is expected to reach US$ 180 billion in FY20. India’s higher education segment is expected to increase to Rs. 2,44,824 crore (US$ 35.03 billion) by 2025. India was ranked 34 among the 100 countries in English Proficiency Index 2019. Increasing internet penetration is expected to help in education delivery.

India has over 250 million school going students, more than any other country. It also has one of the largest networks of higher education institutions in the world. Number of colleges in India reached 39,931 in FY19. As of May 17, 2021, number of universities in India reached 988. India had 37.4 million students enrolled in higher education in 2018-19. In FY21, Gross Enrolment Ratio in higher education in India was 27.1%. Higher education institutes in India are focussing on creating online programmes due to the increasing demand from consumers. In India, the online education market is forecast to reach ~US$ 11.6 billion by 2026. ICAR is one of the largest national agricultural organisations in the world. It has 122 institutes and 67 agricultural universities across India, as of July 2021.

According to KPMG, India has also become the second largest market for E-learning after the US. The sector is expected to reach US$ 1.96 billion by 2021, with about 9.6 million users from US$ 247 million and around 1.6 users in 2016.

According to the National Institutional Ranking Framework, 7 positions were bagged by prominent Indian Institutes of Technology out of the top 10 institution rankings in 2020.

The Cabinet chaired by the Prime Minister, Mr Narendra Modi approved the National Education Policy 2020, making way for large scale, transformational reforms in both school and higher education sectors. The policy is built on foundational pillars of Access, Equity, Quality, Affordability and Accountability, and is aligned with the 2030 Agenda for Sustainable Development. According to Union Budget 2021-22, the government allocated Rs. 54,873.66 crore (US$ 7.53 billion) for Department of School Education and Literacy, compared with Rs. 59,845 crore (US$ 8.56 billion) in Union Budget 2020-21. The government allocated an expenditure budget of Rs. 38,350.65 crore (US$ 5.28 billion) for higher education and Rs. 54,873 crore (US$ 7.56 billion) for school education and literacy. The government also allocated Rs. 3,000 crore (US$ 413.12 million) under Rashtriya Uchchatar Shiksha Abhiyan (RUSA).

In 2021-22, the Ministry of Education has been allocated US$ 12.52 billion, the eight-highest figure allocated to all ministries. The allocation constitutes 2.67% of the central government’s estimated expenditure for 2021-22.

In May 2021, researchers from the Indian Institute of Technology (IIT) Madras announced its collaboration with representatives of the Mobile Payment Forum of India (MPFI) to build voice-based applications in multiple vernacular languages to aid and boost adoption of digital money transactions in the country.

In April 2021, the Ministry of Education (MoE) and University Grants Commission (UGC) started a series of online interactions with stakeholders to streamline the forms and processes for reducing compliance burden in the higher education sector, as a follow-up to the government’s focus on ease of doing business to enable ease of living for the stakeholders.

The Union Minister for Skill Development and Entrepreneurship, Dr. Mahendra Nath Pandey, and Mr. Barry O'Farrell, Australian High Commissioner, participated in a virtual meeting to operationalise and implement VET cooperation to promote development of occupational standards in order to strengthen cooperation in skill development and vocational education and training (VET) between India and Australia.