* India is the export hub for software services. The Indian IT outsourcing service market is expected to witness 6–8% growth between 2021 and 2024.

* In September 2021, India moved up two spots to 46 in the Global Innovation Index (GII) 2021, due to successful advancements in services that are technologically dynamic and can be traded internationally.

* Government is promoting necessary services and will charge zero tax for education and health services under the GST regime.

* In October 2021, the government announced a new helicopter policy to build dedicated hubs and corridors, the policy will boost helicopter services in the country.

* The Indian services sector was the largest recipient of FDI inflows worth US$ 92.41 billion between April 2000-December 2021.

Services exports comprise a major part of the total export from India. According to the RBI, between April-September 2021, India’s service exports stood at US$ 117.6 billion, whereas imports stood at US$ 65.20 billion.

The Indian services sector was the largest recipient of FDI inflows worth US$ 88.95 billion between April 2000 and June 2021. The services category ranked 1st in FDI inflow as per data released by the Department for Promotion of Industry and Internal Trade (DPIIT).

In the first-half of 2021, private equity investments in India stood at US$ 11.82 billion, as compared with US$ 5.43 billion in the same period last year.

In February 2022, the Purchasing Managers' Index stood at 51.8, compared with 51.5 recorded in January 2022. The services sector is expected to record a gradual improvement in hiring activity from January 2022, with the number of coronavirus infections lowering in several parts of the country.

Home healthcare industry in India is expected to reach US$ 10 billion by 2025. The Indian government is planning to introduce a credit incentive programme worth Rs. 50,000 crore (US$ 6.8 billion) to boost healthcare infrastructure in the country. The programme will allow companies to access funds to ramp up hospital capacity or medical supplies with the government acting as a guarantor.

In an effort to build IT capabilities and competitive advantage over international players, Indian companies plan to deploy ~10 cloud platforms to drive business transformation in sectors such as retail, telecommunication and insurance, which is expected to boost growth in the IT & BPM sector.

The Government has undertaken various steps towards boosting growth of the services sector. The Government introduced ‘Services Exports from India Scheme’ (SEIS) aimed at promoting export of services from India by providing duty scrip credit for eligible exports. Under this scheme, a reward of 3-5% of net foreign exchange earned is given for Mode 1 and Mode 2 services. Further, in the mid-term review of Foreign Trade Policy 2015-20, SEIS incentives to notified services were increased by 2%. Also, the Government has identified 12 sectors under the Champion Services Sectors Initiative, aimed at formulating cross-cutting action plans to promote their growth.

In October 2021, the government launched a production linked incentive (PLI) scheme to boost manufacturing of telecom and networking products in India. The scheme is expected to attract an investment of ~Rs. 3,345 crore (US$ 446.22 million) over the next four years and generate additional employment for >40,000 individuals.

In October 2021, the government launched phase-II of the Mahatma Gandhi National Fellowship to empower students and boost skill development.

In October 2021, the PM Ayushman Bharat Health Infrastructure Mission was launched by the government, to strengthen the critical healthcare network across India in the next four to five years.

In September 2021, India and the UK joined the 11th Economic and Financial Dialogue (EFD) to discuss the FTA (Free Trade Agreement) opportunities in services.

In June 2021, India and Australia announced its collaboration in cyber-enabled critical technologies, highlighting the requirement to boost the critical information security infrastructure such as 5G telecom networks.

In April 2021, the Ministry of Education (MoE) and University Grants Commission (UGC) started a series of online interactions with stakeholders to streamline forms and processes to reduce compliance burden in the higher education sector, as a follow-up to the government’s focus on ease of doing business to enable ease of living for stakeholders.

In March 2021, various states and UTs started implementation of the ‘Intensified Mission Indradhanush 3.0’—a campaign aimed to reach those children and pregnant women who were missed out or have been left out of the routine immunisation programme due to the COVID-19 pandemic. This is aimed to accelerate the full immunisation of children and pregnant women through a mission mode intervention.

On January 15, 2021, the third phase of Pradhan Mantri Kaushal Vikas Yojana (PMKVY) was launched in 600 districts with 300+ skill courses. Spearheaded by the Ministry of Skill Development and Entrepreneurship, the third phase will focus on new-age and COVID-related skills. PMKVY 3.0 aims to train eight lakh candidates.

In January 2021, the Department of Telecom, Government of India, signed an MoU with the Ministry of Communications, Government of Japan, to strengthen cooperation in the areas of 5G technologies, telecom security and submarine optical fibre cable system.

Since Open Network for Digital Commerce (ONDC) was launched, two dozen companies were in the process of integrating with the network.

The government stated that under the Prime Minister Employment Generation Programme (PMEGP), 1,03,000 new manufacturing and service units were set up and more than 8,25,000 jobs were created in the previous financial year.

India's services sector expands at fastest pace so far this year in March...

India's services sector grew at its fastest pace this year in March 2022, bolstered by the relaxation of Covid-19 restrictions.

Zomato received an approval from its board to provide a US$ 150 million loan to Grofers India Pvt Ltd (GIPL). 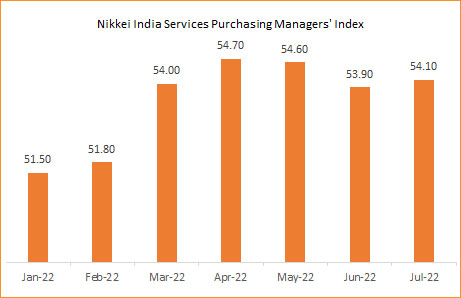