India is presently ranked 76th among a total of 143 economies, as per the Global Innovation Index (GII).

Research and Development in India

India is emerging as a manufacturing and R&D hub for Samsung...

The research ecosystem in India presents a significant opportunity for multinational corporations across the world due to its intellectual capital available in the country. Legions of Indian engineers working across the globe highlight the highly trained manpower available at competitive costs. Consequently, several MNCs have shifted or are shifting their research and development (R&D) base to India. These R&D bases either develop products to serve the local market or help the parent company overseas deliver new innovative generation of products faster to the markets across the world.

India has moved up to the 60th position in the 10th edition of Global Innovation Index (GII) in 2017 and will likely get into the list of the top 25 nations in the next 10 years.%

India ranks second amongst the countries with highest increase in contribution to high-quality scientific research. ^

India-based R&D services companies, which account for almost 22 per cent of the global addressed market, grew much faster at 12.67 per cent.

The market for Engineering R&D (ER&D) companies in India is mainly structured across pure play PES companies such as Cyient, QuEST, eInfochips and the larger IT companies with a PES play such as Wipro, TCS, HCL. India's ER&D services market is expected to reach US$ 15-17 billion by 2020 and North America continues to be the largest market contributing to 55 per cent of revenues.

Some of the major initiatives taken by the Government of India to promote R&D sector are:

With the government’s support, the R&D sector in India is all set to witness some robust growth in the coming years. According to a study by management consulting firm Zinnov, engineering R&D market in India is estimated to grow at a CAGR of 14 per cent to reach US$ 42 billion by 2020.

India is also expected to witness strong growth in its agriculture and pharmaceutical sectors as the government is investing large sums to set up dedicated research centres for R&D in these sectors. The Indian IT industry is also expected to add to the development of the R&D sector.

India is emerging as a manufacturing and R&D hub for Samsung... 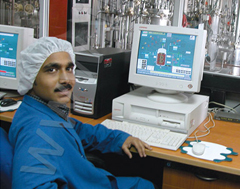 India's R&D sector has been growing at an astonishing pace of 20 per cent per annum for the last several years.

As COVID-19 engulfed the world, the need for medical services and medicines went through a sea ...

India is the leading milk-producing...

More than half of India’s population depends on agricu...

The evolving opportunities and challenges in medical devices sector

Introduction
India is the 4th largest market of medical devi...

Long before the emergence of fantasy sports in India, sp...

Food processing is simply a method by which agricultural pro...