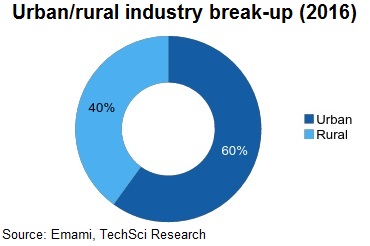 India's demographic profile predominantly consists of young population which is increasingly turning urban. From a foreign investors’ point of view, it is an attractive proposition with several long term opportunities. The Government of India too has focussed on urban development in the country with specific programs such as smart cities and many more. A large and growing middle class, prominent in such urban centres, is not only increasingly consuming higher end goods and services but also redefining the luxury market.

A ‘new wave’ of non-metro cities including 10 high potential cities like Bhopal and Patna, and 30 emerging cities like Agra and Amritsar among others, are catching up with the eight metro cities of India in terms of consumption, media penetration and investment opportunities, according to a report by Ernst and Young.

Companies and a new generation of entrepreneurs are aiming to tap into unmet needs of urban population. The emergence and rapid growth of app-based cab service companies such as Uber and Ola are examples in the transportation sector. Similarly, several internet and mobile based services – from grocery deliveries to finding doctors – are all trying hard to secure a foothold in the high potential urban market. Apart from basic services, several niche players with designer products and premium offerings are also trying hard to establish themselves in the urban consumer market. The growing customer base for luxury products coupled with the awareness of international labels and discounts are driving the business of premium products online.

Growing income levels, a youthful demographic and increasing preference for brands in urban areas are driving urban market growth. Already the urban markets are witnessing steady growth in traditional goods and services such as fast moving consumer goods. The country is also set to become a vital market for wearable technology such as smart watches and fitness monitors, driven by consumer interest in such gadgets and the growth of spending on consumer durables.