The rural segment is growing at a healthy pace of 8-10 per cent per annum and is expected to add US$ 100 billion in consumption demand by 2017. 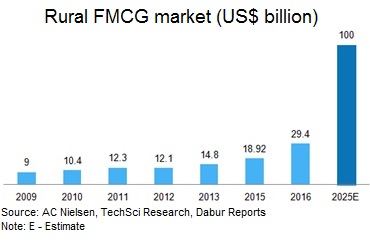 According to the third annual edition of Accenture Research, “Masters of Rural Markets: From Touchpoints to Trustpoints - Winning over India's Aspiring Rural Consumers,” rural consumers are particularly aspiring or striving to purchase branded, high quality products. Consequently, businesses in India are optimistic about growth of the country's rural consumer markets, which is expected to be faster than urban consumer markets. The report highlights the better networking among rural consumers and their tendency to proactively seek information via multitude sources to be better informed while making purchase decisions. Importantly, the wider reach of media and telecommunication services has provided information to India’s rural consumers and is influencing their purchase decisions. In line with general trend, rural consumers are evolving towards a broader notion of value provided by products and services which involves aspects of price combined with utility, aesthetics and features, and not just low prices.

The hinterlands in India consist of about 650,000 villages. These villages are inhabited by about 850 million consumers making up for about 70 per cent of population and contributing around half of the country's Gross Domestic Product (GDP). Consumption patterns in these rural areas are gradually changing to increasingly resemble the consumption patterns of urban areas. Some of India's largest consumer companies serve one-third of their consumers from rural India. Owing to a favourable changing consumption trend as well as the potential size of the market, rural India provides a large and attractive investment opportunity for private companies.

India’s per capita GDP in rural regions has grown at a Compound Annual Growth Rate (CAGR) of 6.2 per cent since 2000. The Fast Moving Consumer Goods (FMCG) sector in rural and semi-urban India is expected to cross US$ 20 billion mark by 2018 and reach US$ 100 billion by 2025@.

Following are some of the major investments and developments in the Indian rural sector.

The Government of India has planned various initiatives to provide and improve the infrastructure in rural areas which can have a multiplier effect in increasing movements of goods, services and thereby improve earnings potential of rural areas subsequently improving consumption.

As is the trend with urban India, consumers in the rural regions are also expected to embrace online purchases over time and drive consumption digitally. The rural regions are already well covered by basic telecommunication services and are now witnessing increasing penetration of computers and smartphones. Taking advantage of these developments, online portals are being viewed as key channels for companies trying to enter and establish themselves in the rural market. The Internet has become a cost-effective means for a company looking to overcome geographical barriers and broaden its reach.

Market research firm Nielsen expects India’s rural FMCG market to reach a size of US$ 100 billion by 2025. Another report by McKinsey Global Institute forecasts the annual real income per household in rural India to rise to 3.6 per cent 2025, from 2.8 per cent in the last 20 years.

Introduction
Agriculture, including its allied sector, is the largest s...

Overview
India is an agrarian economy, with ~54.6% people directly depe...